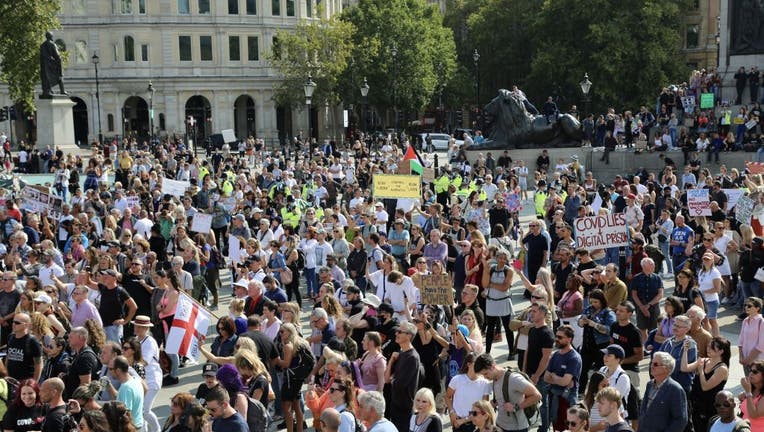 Demonstrators gathering at Trafalgar Square to stage a protest against the new type of coronavirus (Covid-19) measures called StandUpX, face off with police officers, in London, United Kingdom on September 19, 2020. (Photo by Hasan Esen/Anadolu Agenc

LONDON (AP) - Police in London clashed with protesters Saturday at a rally against coronavirus restrictions, even as the mayor warned that it was “increasingly likely” that the British capital would soon need to introduce tighter rules to curb a sharp rise in infections.

Scuffles broke out as police moved in to disperse hundreds of demonstrators who gathered in London’s central Trafalgar Square. Some protesters formed blockades to stop officers from making arrests and traffic was brought to a halt in the busy area.

The “Resist and Act for Freedom” rally saw dozens of people holding banners and placards such as one reading “This is now Tyranny” and chanting “Freedom!” Police said there were “pockets of hostility and outbreaks of violence towards officers.”

Britain’s Conservative government this week imposed a ban on all social gatherings of more than six people in a bid to tackle a steep rise in COVID-19 cases in the country. Stricter localized restrictions have also been introduced in large parts of England’s northwestern cities, affecting some 13.5 million people.

But officials are considering tougher national restrictions after Prime Minister Boris Johnson confirmed Friday that Britain is “now seeing a second wave” of coronavirus, following the same trend seen in France, Spain and across Europe.

London Mayor Sadiq Khan said the city may impose some of the measures already in place elsewhere in the U.K. That may include curfews, earlier closing hours for pubs and banning household visits.

“I am extremely concerned by the latest evidence I’ve seen today from public health experts about the accelerating speed at which COVID-19 is now spreading here in London,” Khan said Friday. “It is increasingly likely that, in London, additional measures will soon be required to slow the spread of the virus."

The comments came as new daily coronavirus cases for Britain rose to 4,322, the highest since early May.

The latest official estimates released Friday also show that new infections and hospital admissions are doubling every seven to eight days in the U.K. A survey of randomly selected people — not including those in hospitals or nursing homes — estimated that almost 60,000 people in England had COVID-19 in the week of Sept.4, about 1 in 900 people.

Britain has Europe’s worst death toll in the pandemic with 41,821 confirmed virus-related deaths, but experts say all numbers undercount the true impact of the pandemic.

In a statement, British police said the protesters Saturday were “putting themselves and others at risk” and urged all those at the London rally to disperse immediately or risk arrest.