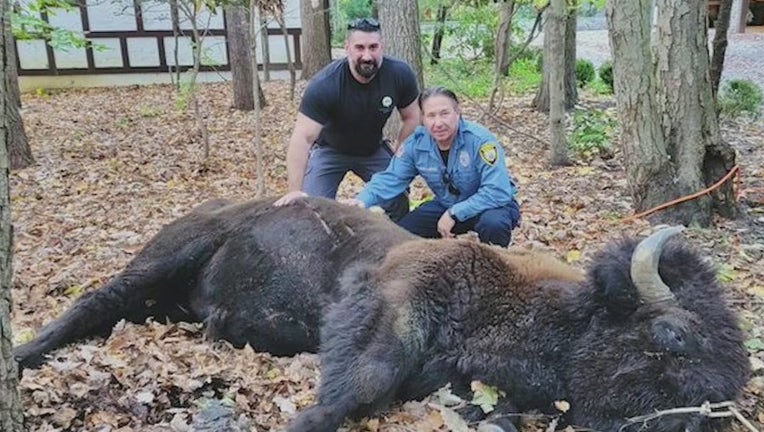 A 2,500-lb. bison was captured and returned to its home in Marlboro Township, New Jersey. (Monmouth County SPCA)

NEW JERSEY - Police in Monmouth County had a big job on their hands earlier this week when a pet bison bolted from its home and roamed through Marlboro Township.

The Monmouth County SPCA shared a photo of the massive mammal sedated and laying on its side Wednesday. The agency's Humane Law Enforcement & Animal Control team was called in after the 2,500-pound bison escaped from a nearby farm where it lives with other bison.

"Thanks to the quick response and planning from our team, no humans or animals were harmed, and when this giant horned fluffernutter wakes up, he’ll be home sweet home!" wrote the SPCA on Facebook.

The ox-like mammals are native to North America. They have a broad heavy head that is carried low. They eat grass, weeds and other leafy plants.

Despite their size, they have been clocked at speeds of 40 miles per hour.

"To answer a few questions being asked: 1) he is in ideal body condition, the angle of the photo makes him look thin, 2) he resides on a farm a few miles away with other bison, 3) they are pets and not used for meat," wrote the Monmouth County SPCA.