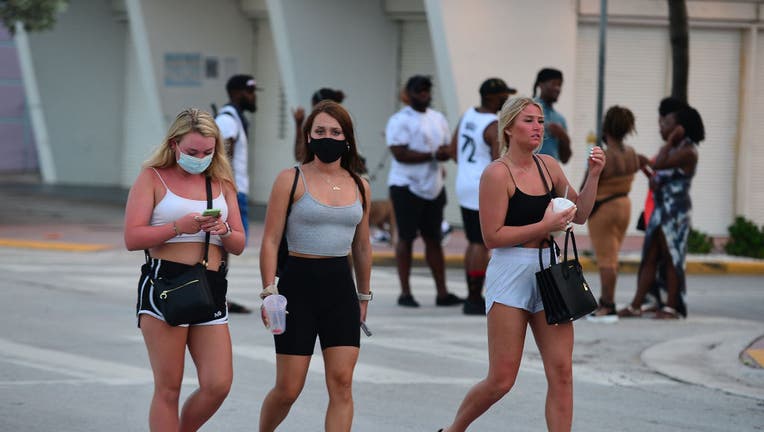 MIAMI BEACH, FLORIDA - JULY 20: People walk on Ocean Drive some wearing face masks and some are not with a mandate to wear face masks in public spaces was put into effect on June 30, in the entertainment district of Miami Beach on July 20, 2020 in Mi

NEW YORK - Police in Miami Beach are reportedly handing out fines for not wearing face masks to people even while they're outside restaurants looking over a menu.

The Miami Herald reports that the city has handed out more than $14,400 in fines to violators of the executive order since July 23. Of the 288 people fined, only four have paid fines.

Police officers take a photo of the violator, ask for ID and then write the ticket for $50. Miami Beach Police have shared bodycam footage of citations being handed out. Violaters have 30 days to pay the fine. Additional fines follow and even a misdemeanor charge and jail time are possible.

The paper reports that one man was fined while taking off his mask to answer the phone and another was walking alone along a quiet street.

Miami Beach Mayor Dan Gelber said last week that recent decreases in new COVID-19 cases and hospitalizations in the area did not imply that mask wearing was no longer required. Statewide, Florida reported its largest single-day jump in deaths yet on Tuesday.

Marion County officials made headlines recently after Sheriff Billy Woods forbade his deputies and visitors to the sheriff's office from wearing face masks.