Helicopters and vessels from the Nassau County Police Department will step up their monitoring of the shoreline for sharks. Beach lifeguards are also increasing monitoring for sharks.

NEW YORK - The third day in a row of shark sightings along Long Island's south shore has prompted restricting bathing at several beaches there.

"A shark spotting off the coastline by town lifeguards has been confirmed," the Town of Hempstead tweeted at about 1:50 a.m. "Town beaches remain open — swimming is restricted for the time being."

Hempstead Town Supervisor Donald Clavin Jr. said the shark was in chest-deep water, which means it was very close to shore. Lifeguard Ethan Grassini and several beachgoers who were in the water spotted the shark. The bathers then began running out, he added.

"Ethan and the lifeguards were able to calm some of the nervous residents and get them out of the water safely," Clavin said at a press conference. "Our understanding is from Point Lookout all the way down to Long Beach right now the beaches are closed" to swimming.

The species of shark wasn't clear but Grassini estimated it to be about 6 feet long, Clavin said.

Less than two hours later, lifeguards were going to reopen the water when they spotted a 10-foot shark.

"These enhanced patrols will use already active police helicopters assigned on patrol now to also scan the water for movement," she said.

The Nassau County Marine Bureau will also patrol the water, she added. In the event of a shark sighting, police officers will notify beaches first and then other vessels over the radio to make sure everyone is aware of the potential danger.

"You're going to see some more intensified patrols over the coming days and weeks," Lt. Adam Fischer, the commanding officer of the Marine Bureau, said at a press conference. 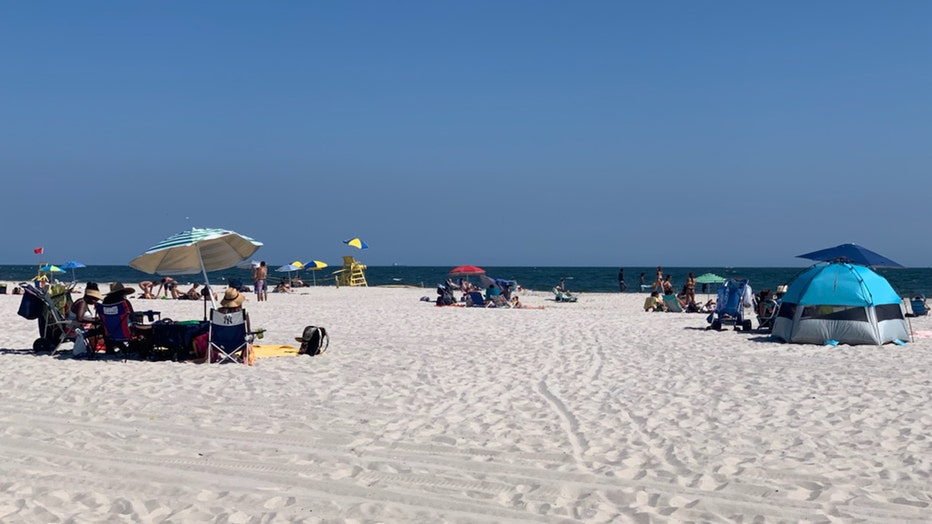 At least three of the sharks spotted so far this week were bull sharks, which can be dangerous, officials said.

Bull sharks are found in shallow coastal waters from Brazil through New York and New England but are rare north of Delaware, according to NOAA Fisheries. They are common in lagoons, bays, and river mouths. In fact, they often swim "far into fresh water," according to NOAA.

Sharks were spotted for the third straight day along Long Island's south shore. Lifeguards cleared swimmers out of the water at several beaches. The county executive promised more helicopter patrols over beaches to keep an eye out for more sharks.

"They have a unique ability to penetrate far up rivers and hypersaline bays, particularly when they're young," the MarineBio Conservation Society states on its website. "They have often been found hundreds of [kilometers] from the sea."

Hempstead lifeguard Connor Byrne spotted a bull shark 5 feet from the shore at Lido West Beach on Tuesday. A day earlier, lifeguard Logan Fitzgerald was on surfboard patrol when he saw a shark swim in between him and the shore there.