Swimming was banned at several beaches on Monday and Tuesday because of multiple sightings of what were believed to be bull sharks. Experts say bull sharks are most likely to appear at dusk and dawn. Reported by Teresa Priolo

HEMPSTEAD, N.Y. (FOX 5 NY/AP) - Swimming was banned at some Nassau County beaches for several hours on Monday and Tuesday after shark sightings two days in a row.

Swimmers were cleared from the ocean at several beaches at around 3:15 p.m. on Tuesday after simultaneous sightings of bull sharks. By 5 p.m., Jones Beach and Long Beach had reopened. The others remained closed.

The sightings on Tuesday followed a series of sightings on Monday that began near Lido West Beach. A Town of Hempstead lifeguard on a surfboard saw a shark of "significant size" there, prompting red flags to go up at a few south shore beaches as a precaution, the town said in a tweet posted around 12:16 p.m. on Monday.

"It was hard to see when it shot out of the water but it definitely spun around, definitely a dorsal fin," lifeguard Logan Fitzgerald said. He added that he estimated the shark to be between 7 and 10 feet long.

Fitzgerald ordered a handful of surfers out of the water and soon all bathers, too.

Chief ocean lifeguard Mike Romano said the shark swam in between Fitzgerald and the shoreline, which would mean that it was about 10 yards from the edge of the water.

The sightings occurred off the south shore of the island. Robert Moses reports.

Lifeguards and bay constables teamed up to try to track the shark. About three hours later, officials tweeted that a second shark was spotted, prompting them to keep Civic Beach, Lido Beach, Lido West Beach, Town Park Point Lookout, and Town Park at Sands closed for swimming "as per the NYS shark protocols."

A Town of Hempstead lifeguard spotted a shark on Monday, prompting authorities to get beachgoers out of the water. The lifeguard estimated that it was between 7 and 10 feet long.

Hempstead town officials said they spotted a third shark later in the day.

After the first shark sighting, town spokesman Michael Caputo had said officials hoped the beaches could reopen at some point Monday afternoon. Just before 5 p.m., the town announced that swimming was still banned but that people could at least go wading.

"Beachgoers are now permitted to enter the water up to their knees at Town of Hempstead beaches that experienced swimming restrictions due to earlier shark sightings: Civic Beach, Lido Beach, Lido West Beach, Town Park Point Lookout and Town Park at Sands," the town tweeted.

The same day, a shark attack in Maine killed a woman from New York City. The Maine Marine Patrol said the woman was swimming off the shore of Bailey Island on Monday when a shark mortally wounded her.

New York's Department of Environmental Protection has several resources about sharks and safety for beachgoers. 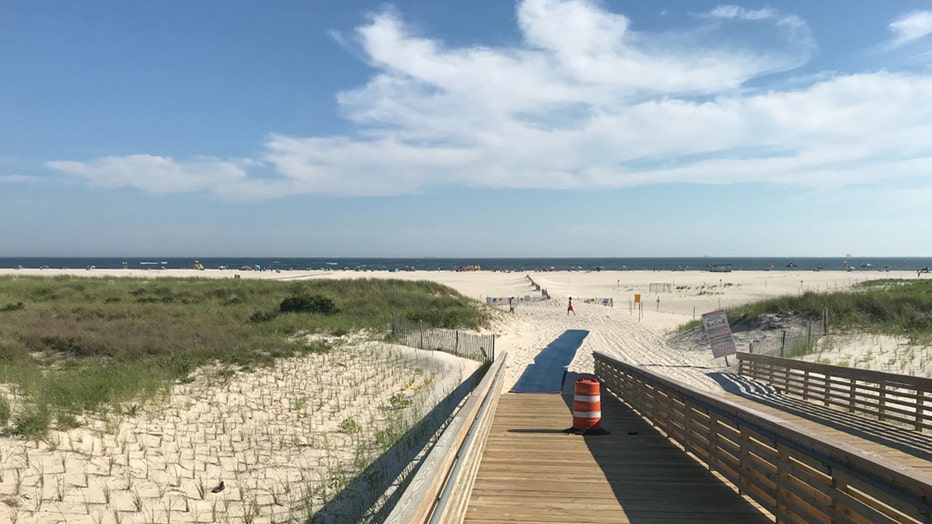 "New York's ocean beaches are part of a wild and natural marine ecosystem with a rich diversity of sea life. Humans assume risk whenever they enter any wild environment, whether on land or in the water," the DEC says in a post online. "Although it is impossible to eliminate risk altogether, people can modify their behavior to minimize potential interactions with sharks and reduce overall risk."

The DEC recommends that you follow these guidelines to minimize your chances of an unfriendly encounter with the ocean's most fearsome predators:

The organization OCEARCH is tracking several great white sharks near the coasts of New York and New Jersey. (JULY 13, 2020)