A paraglider in Spain escaped with his life just seconds before he plummeted to the ground after he got tangled in his lines during a trip while "acro-paragliding". Credit: Kevin Philipp via Storyful

ORGANYA, Spain - A paraglider is lucky to be alive after his parachute tangled up moments after he deployed it.

Kevin Philipp shared the heart-stopping footage of the incident on YouTube.

In the video caption, he explained that was set to perform an acro-paragliding trick in Organya, Spain during strong turbulence, but things went wrong.

His brake line got stuck.

In the video, you see his quick descent from the sky as Philipp's parachute lines tangle around him. He's then forced to deploy his rescue parachute, but it fails to open and wraps around him. 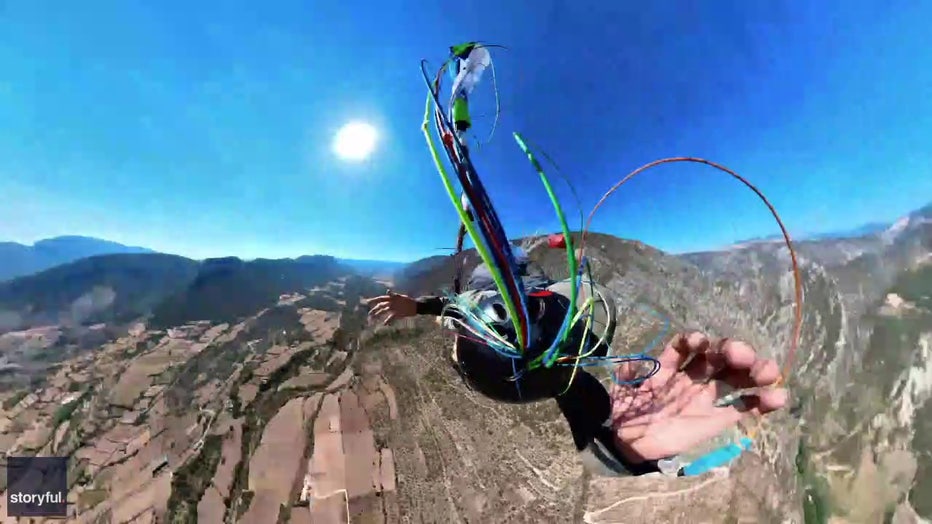 "Falling into the lines and wing made the rescue parachute throw quite hard. The falling speed increased a lot due to the twisting wing," Philipp wrote in the caption.

He added that with just one second to spare before he meets the ground, Philipp is able to manually open his rescue chute.

"This was not the day to die!" Philipp wrote. "This occasion is quite unlucky and rare. Just to keep in mind. Fly high, land safe."

According to the U.S. Hang Gliding and Paragliding Association (USHPA), paragliders fly lightweight aircraft that have no rigid primary structure and resemble elliptical parachutes. They sit in a harness suspended below a fabric wing that consists of many interconnected baffled cells. They can travel hundreds of miles on thermals, soar for hours in winds pushed upward by coastal terrain, or simply fly down from a mountain in calm, still air.

In 2020, there were three recorded paragliding deaths in the U.S.