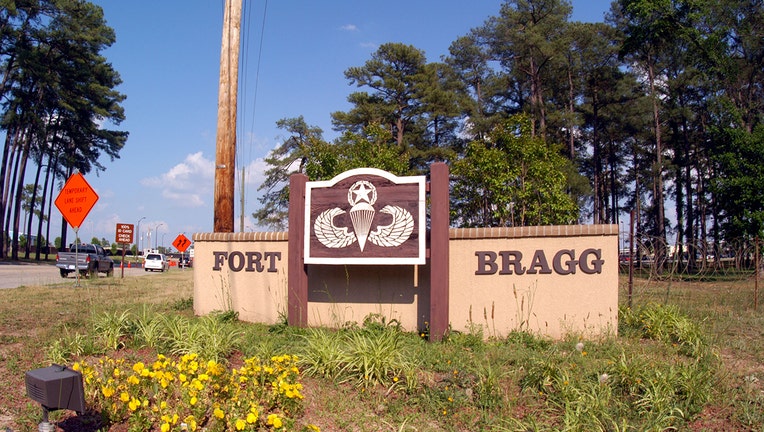 One of the entrance signs to facillities in Fort Bragg in Fayettville, North Carolina. (Photo by Logan Mock-Bunting/Getty Images)

WASHINGTON - Fort Bragg would become Fort Liberty. Fort Gordon would be Fort Eisenhower. And, for the first time, Army bases would be named after Black soldiers and women. An independent commission on Tuesday recommended new names for nine Army posts that now commemorate Confederate officers.

The recommendations are the latest step in a broader effort by the military to confront racial injustice, most recently in the aftermath of the May 2020 police killing of George Floyd in Minneapolis.

Fort Bragg, in North Carolina, is the only base that wouldn’t be named after a person. Two others would be named after Black soldiers, and three would include women's names. Fort Gordon in Georgia would get the most well-known name — commemorating President Dwight D. Eisenhower, who led allied forces in Europe in World War II.

Other proposed renamings would honor lesser-known heroes, including several who received the Medal of Honor, the military's highest award. Fort Polk, in Louisiana, would be renamed Fort Johnson, after Sgt. William Henry Johnson, a Black Medal of Honor recipient who served in the Army in World War I.

Fort A.P. Hill in Virginia would be renamed Fort Walker, after Mary Edwards Walker, a doctor who treated soldiers in the Civil War and later received a Medal of Honor.

Fort Benning, Georgia, would be named after a married couple: Lt. Gen. Hal Moore, who served in Vietnam and received the Distinguished Service Cross, and his wife Julia, who prompted the creation of teams that do in-person notifications of military casualties.

And Fort Lee, Virginia, would get a hyphenated name — Fort Gregg-Adams — and is the only one that would commemorate someone who remains alive today: Lt. Gen. Arthur J. Gregg, known as a logistics leader. Lt. Col. Charity Adams - the other half of the name — led the first female Black unit of the Army deployed in World War II.

A final report is due to Congress by Oct. 1, and will include the costs of removing and changing the names. The renaming process was laid out in a law passed by Congress in late 2020 The secretary of defense is expected to implement the commission’s plan no later than Jan. 1, 2024.

The proposal to change the names triggered widespread discussion and debate within the bases' communities around the country. Panel members visited the bases, met with local leaders and residents, and relied heavily on their recommendations when choosing the final names, said the vice chairman, Ty Seidule.

For years, U.S. military officials had defended the naming of bases after Confederate officers. As recently as 2015 the Army argued that the names did not honor the rebel cause but were a gesture of reconciliation with the South.

But in the aftermath of the Floyd killing, and the months of racial unrest that followed, Congress ordered a comprehensive plan to rename the military posts and hundreds of other federal assets such as roads, buildings, memorials, signs and landmarks that honored rebel leaders.

The change in the military’s thinking was reflected in congressional testimony by Army Gen. Mark Milley, chairman of the Joint Chiefs of Staff, a month after Floyd’s death. He said that the current base names could be reminders to Black soldiers that rebel officers fought for an institution that may have enslaved their ancestors.

Defense Secretary Lloyd Austin — the nation’s first Black Pentagon chief — has spoken bluntly of his own personal brushes with racism. During his Senate confirmation hearing, he told of serving as a lieutenant colonel with the 82nd Airborne at Fort Bragg when three white soldiers, described as self-styled skinheads, were arrested in the murder of a Black couple who were walking down a street.

Investigators concluded the two were targeted because of their race, and all told, 22 soldiers were linked to skinhead and other similar groups or found to hold extremist views.

The current chief of the Air Force, Gen. Charles Q. Brown, posted an emotional video last June in which he discussed the difficulties he experienced as a young Black pilot. Brown, the first Black Air Force chief, said he had to prove to white supervisors "that their expectations and perceptions of African-Americans were invalid."

Created in 2020, the Naming Commission first met in March 2021 and began taking name recommendations from the public in September. Overall, the commission received more than 34,000 potential names, which it said included about 3,670 unique ones that could possibly be used. That list was later narrowed to about 100 before the final nine were chosen to be recommended to Congress.

"All these bases honored men who wouldn’t want me or other Black Americans serving in uniform, let alone in Congress," he said. "We cannot ask today’s servicemen and women to defend our country, while housing and training them and their families on installations celebrating those who betrayed our country in order to enslave others and preserve white supremacy."

Panel members said Tuesday that the decisions were difficult because they had so many heroes to choose from. But in all cases, they said they had widespread agreement from the local communities.

President Joe Biden announced an additional $800 million in military aid to help Ukraine fight the Russian invasion in remarks on April 21, 2022, from the White House.

In at least one case, however, the panel members said that local residents were adamant that they wanted a name that wasn't on the final list: Fort Liberty. During the panel's final visit to Fort Bragg, people at the meeting "were very, very adamant about the name Fort Liberty," said Lawrence Romo, a commission member. "We gave a lot of deference to what the Fort Bragg community wanted."

Seidule said that the panel wanted names that "will inspire soldiers to achieve the highest standards demanded by their nation in peace and in war."

The panel also is considering new names for two Navy ships: the USS Chancellorsville and USNS Maury. Those and the new names for hundreds of streets, buildings and other assets, will be in the final report.

A final report is due to Congress by Oct. 1, and will include the costs of removing and changing the names. Under the law, the secretary of defense is expected to implement the commission’s plan no later than Jan. 1, 2024.