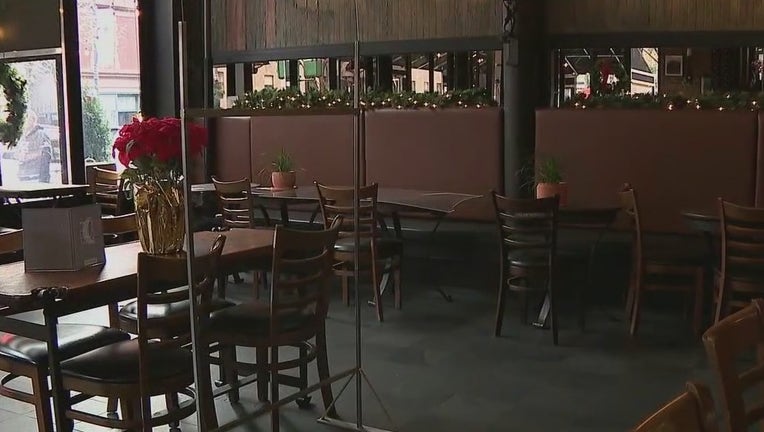 NEW YORK - The global coronavirus pandemic of 2020 and now stretching into 2021 has denied restaurants in New York City — those somehow still in business — some of the biggest nights of the year to pay off their debts.

Guray Yuksel, the owner of Bella Luna on the Upper West Side, said the five crucial dining nights for him every year are: Valentine's Day, Mother's Day, the night of the New York City Marathon, the night before Thanksgiving (because of the inflation of the parade balloons), and New Year's Eve.

"Those are the five days," Yuksel said. "We lost all of them."

"We have five tables outside — that's all," he said.

He said he loses $15,000 to $20,000 every month while it remains cold outside and the city forbids indoor dining. And while Yuksel's take-out business has grown significantly and allowed him to rehire some of the staff he laid off in the spring, Bella Luna's overall business has still declined by 50% from a year ago.

Moonrise Izakaya general manager Joshua Batista also said he expects to seat a fraction of the diners he did last New Year's Eve without any of the passed appetizers or midnight saki toast for which his regulars return.

"Hanging on by the skin of our teeth and we are grateful for the people in the neighborhood that continued to support us," Batista said. "For most places, New Year's is how you pay off some nights. It's actually a huge night for us."

In a statement to FOX 5 NY, the NYC Hospitality Alliance said the dining restrictions imposed by both government and mother nature this New Year's Eve are a "bad way to end a horrible year."

Yuksel and Batista said they expect their businesses to continue at this trickling pace until the weather warms up in April or May. They hope takeout and whatever kind of dining the city allows sustains them until then.

A previous version of this article incorrectly cited the New York State Restaurant Association instead of the NYC Hospitality Alliance.