Here is a timeline of events before the rampage at Oxford High School on Nov. 30, 2021 and what has happened since.

Four students were killed and several others were hurt in a shooting at Oxford High School on Nov. 30 in Oxford, Michigan, a city located about 40 miles north of Detroit. The shooter, also a student, was taken into custody by police within minutes.

Several people are now facing charges, including the suspected shooter, Ethan Crumbley, a 15-year-old sophomore, and his parents.

Here is a timeline of events before the rampage and what has happened since:

His 15-year-old son Ethan later posts a photo on Instagram of himself holding the semi-automatic handgun, writing: "Just got my new beauty today. SIG SAUER 9mm. Any questions I will answer." He includes an emoji of a smiling face with heart eyes.

Saturday, Nov. 27: 3 days before the shooting

Jennifer Crumbley writes on social media that it is a "mom and son day testing out his new Christmas present," the prosecutor says.

Monday, Nov. 29: The day before the shooting

A teacher sees Ethan searching online for ammunition with his cellphone during class and reports it to school officials, McDonald says. School personnel call his mother, leave a voicemail and email her. She does not respond. While exchanging text messages with her son, she writes: "Lol. I'm not mad at you. You have to learn not to get caught."

That night, Ethan Crumbley records a video in which he discusses killing students, according to sheriff’s Lt. Tim Willis.

Tuesday, Nov. 30: The day of the shooting

A teacher finds a note on Ethan's desk that alarms her enough to take a photo, the prosecutor says. It includes a drawing of a handgun and the words: "The thoughts won't stop. Help me." Also depicted is a bullet with the words "blood everywhere" above a person who appears to have been shot twice and is bleeding. A laughing emoji is drawn below the figure. The note also says "my life is useless" and "the world is dead."

The parents are immediately summoned to the school for a meeting that occurred around 10 a.m. A school counselor removes Ethan from the classroom and takes him to the office with his backpack. The counselor obtains the drawing, but Ethan has already scratched out portions. The parents are shown the note and advised that they are required to get him counseling within 48 hours. They resist the idea of Ethan immediately leaving school and depart without him, McDonald says. He returns to the classroom.

RELATED: Oxford superintendent: No disciplinary action was warranted for shooting suspect prior to attack

About 12:51 p.m., Ethan emerges from a bathroom with the gun his father bought four days before. He fires at students in the hallway, killing four and wounding six students and one teacher. Deputies capture him within minutes of the shooting.

When news of an active shooter becomes public, Jennifer Crumbley texts her son at 1:22 p.m.: "Ethan don't do it."

Fifteen minutes later, at 1:37 p.m., James Crumbley calls 911 to report that a gun was missing from his house and he believes his son may be the shooter. The gun had been kept unlocked in a drawer in the parents' bedroom, McDonald says. 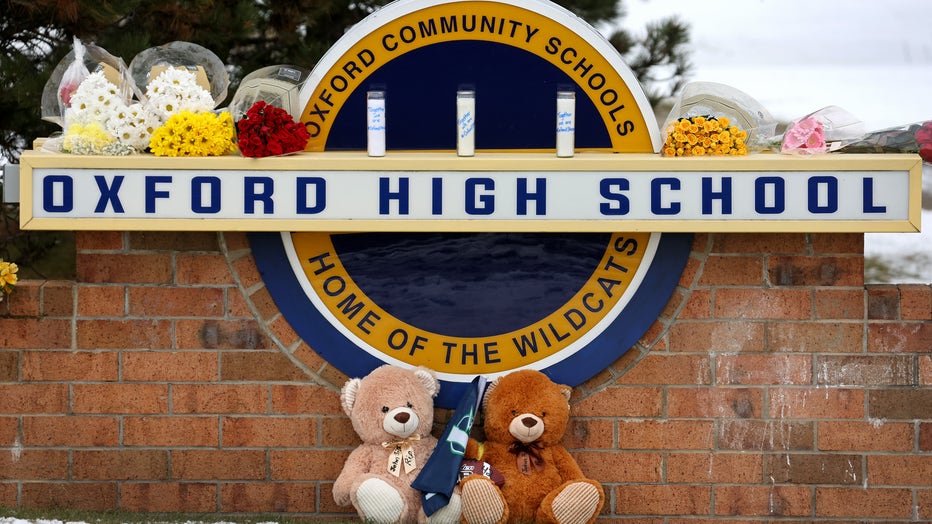 OXFORD, MICHIGAN - DECEMBER 01: Stuffed bears and flowers are gathered at a makeshift memorial outside of Oxford High School on December 01, 2021 in Oxford, Michigan. Yesterday, four students were killed and seven injured when a gunman opened fire on

A fourth student, Justin Shilling, dies at the hospital.

Ethan is charged as an adult with murder and terrorism.

RELATED: Why was Ethan Crumbley charged with terrorism in Oxford shooting?

James and Jennifer Crumbley are charged with involuntary manslaughter.

They do not show up for a 4 p.m. arraignment and authorities begin searching for the pair. Late Friday, U.S. Marshals announce a reward of up to $10,000 each for information leading to their arrests.

The Crumbleys are arrested at a commercial building in Detroit.

Later that morning, they enter not guilty pleas during a Zoom hearing, and a judge sets bond at $500,000 for each.

James and Jennifer Crumbley, the parents of the Oxford High School shooting suspect, Ethan Crumbley, made their first appearance in court Saturday, Dec. 4, and entered not guilty pleas to each of the four counts of involuntary manslaughter filed against them.

Two $100 million lawsuits are filed against Oxford High School officials, claiming they had knowledge of threats before the deadly shooting.

The school principal, district superintendent, the dean of students, two counselors, a staff member, and two teachers are named in the suits, which allege that parents alerted school administrators about worrisome social media posts made by the suspected shooter beforehand, according to FOX 2 Detroit.

The school district does not immediately respond to a request for comment from the news station.