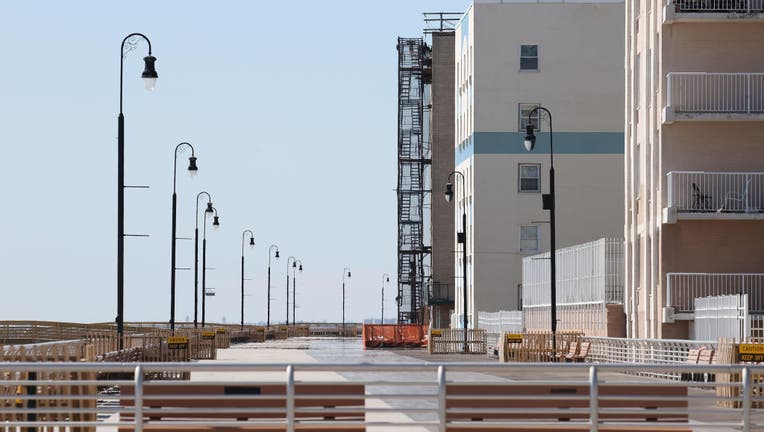 In less than two weeks, the coronavirus has claimed six lives at one Long Island retirement community and left residents there isolated from loved-ones barred from visiting.

“I have a feeling that I very likely may never see my mother again,” said children's author James Preller, whose 94-year-old mother, Ann Preller, is a resident.

At least 12 remaining residents and 13 staff members at the Peconic Landing community, in Greenport, had tested positive for COVID-19 as of Friday, though officials said six of the staff have since recovered.

The seaside complex is about 100 miles east of Manhattan, in an upscale beach community on the North Fork of Long Island, a peninsula jutting out into Long Island Sound. Some residents live independently in cottages, others in a memory-care center and a full-care nursing home.

Preller, 59, said the isolation and disconnection are the cruelest aspects of the outbreak.

He said he's not sure his mother, who lives in the community's nursing center, understands what is happening. He worries she may feel abandoned. Preller was forced to cancel a March 21 visit to celebrate her birthday.

“I want to squeeze her hand. I want to look her in the eye. I want to see her smile and let her know that we're there," he said. "That's what's so really heart-wrenching about the experience right now.”

Preller doesn't fault Peconic Landing staff for the outbreak of COVID-19, the first case of which was confirmed there on March 10 after a rideshare driver who also worked part-time at the facility, picked up an infected passenger.

The residents of the community who have died ranged in age from 88 to 97. A majority were already ill from other causes.

The community currently houses more than 370 people. Some of their relatives have formed a Facebook group to share information and concerns.

Joan Schnee, of Columbus, Ohio, posted that her mother lives in the community's independent living section, is kept up to date on the community's closed-circuit television station and feels safe.

“Most of her friends have all stayed and feel very confident in the level of caution and mandatory isolation,” she said. “For now, she insists on staying put.”

But others aren't feeling as confident.

One woman, who did not want her name used because she feared it might affect the treatment of her mother, is concerned that visitors were still allowed at Peconic Landing through March 16 without screening precautions such as temperature checks.

The facility's dining hall, known as the bistro, did not fully close until after breakfast on March 12, she said.

A woman who worked as a contractor at the facility, and also did not want her name used because she feared for her job, said the only COVID-19 screening for those entering the nursing facility in those early days involved answering questions at the front desk about whether you had been exposed to the coronavirus.

She said when she answered that everybody in the community had probably been exposed, she was still let in.

Peconic Landing officials said they are currently doing health screenings for all workers at the beginning and end of every shift. They said staff members are wearing the appropriate personal protective equipment. Anyone known to have been exposed to the virus is placed on paid leave and staff have been instructed to stay home if they are sick. Officials have set up a web page with updates.

"While we live and breathe the impacts of this virus every day, we must remember that we are all in this together," Robert J. Syron, president and CEO of Peconic Landing said in a statement. “This global pandemic is bigger than all of us; we move forward working together to protect our members, our team and our local community.”

Former New York Lt. Gov. Betsy McCaughey, now chairwoman of the nonprofit Committee to Reduce Infection Deaths, said once the coronavirus gets into a nursing home or retirement community it is very hard to control infections.

The disease causes mild to moderate flu-like symptoms in most people, but can be fatal, especially for the elderly and those with preexisting respiratory and other medical conditions.

McCaughey points to Kirkland, Washington, where more than two dozen residents of a nursing home have died of complications from COVID-19.

She said she's not familiar with all the steps being taken at Peconic Landing. But she said nurses and staff at most nursing homes and assisted living centers don't have enough training in infection control to contain the virus.

“I would want to get my mother out," she said.