AOC speaks out against sexism

A day after Rep. Alexandria Ocasio-Cortez said she does not accept Rep. Ted Yoho's apology for his verbal assault, she and other female lawmakers spoke out on the floor of the U.S. House and condemned a sexist culture of "accepting violence and violent language against women" in Washington and elsewhere.

WASHINGTON (AP) - Rep. Alexandria Ocasio-Cortez's outrage over a Republican lawmaker's verbal assault broadened into an extraordinary moment on the House floor Thursday as she and other Democrats assailed a sexist culture of "accepting violence and violent language against women" whose adherents include President Donald Trump.

A day after rejecting an offer of contrition from Rep. Ted Yoho, R-Fla., for his language during this week's Capitol steps confrontation, Ocasio-Cortez and more than a dozen colleagues cast the incident as all-too-common behavior by men, including Trump and other Republicans.

"This issue is not about one incident. It is cultural," said Ocasio-Cortez, D-N.Y., calling it a culture "of accepting a violence and violent language against women, an entire structure of power that supports that."

The remarkable outpouring, with female lawmakers saying they'd routinely encountered such treatment, came in an election year in which polls show women leaning decisively against Trump, who has a history of mocking women.

"I personally have experienced a lifetime of insults, racism and sexism," said Rep. Barbara Lee, D-Calif. "And believe me, this did not stop after being elected to public office."

Trump was captured in a 2005 tape boasting about physically abusing women, and his disparagement of House Speaker Nancy Pelosi has included calling her "crazy." In an apparent reference to that tape, which drew attention during the 2016 presidential campaign, Ocasio-Cortez said men accost women "with a sense of impunity" every day, including when "individuals who hold the highest office in this land admit, admit to hurting women."

Rep. Alexandria Ocasio-Cortez rejected Rep. Ted Yoho's apology and said he was making excuses rather than accepting responsibility for his words to her.

She also recalled that last year, Trump said she and three colleagues on the "squad" of progressive Democratic women of color should "go back" to their home countries — even though all but one were born in the U.S. and all are American citizens.

The lawmakers joining Ocasio-Cortez represented a wide range of the chamber's Democrats, underscoring their unity over an issue that is at once core to the party and capable of energizing its voters.

On the establishment side was No. 2 House leader Steny Hoyer of Maryland, a moderate 20-term veteran. His appearance, along with supportive words at a separate news conference by Pelosi, D-Calif., were a noteworthy contrast to occasional clashes Ocasio-Cortez has had with party leaders.

Ocasio-Cortez, 30, is a freshman who has made her mark as one of Congress' most insistent and outspoken progressives. Those speaking up included the three other "squad" members — Reps. Ilhan Omar of Minnesota, Ayanna Pressley of Massachusetts and Rashida Tlaib of Michigan.

No Republicans spoke on the House floor. A Yoho spokesman emailed a statement in which the lawmaker said "no one was accosted, bullied, or attacked" during what he called a brief policy discussion.

Yoho, one of Congress' most conservative lawmakers, said Ocasio-Cortez doesn't have the "right to inflate, talk about my family, or give an account that did not happen for political gain. The fact still remains, I am not going to apologize for something I didn't say."

"When someone apologizes they should be forgiven," McCarthy said. He added later, "I just think in a new world, in a new age, we now determine whether we accept when someone says 'I'm sorry' if it's a good enough apology."

But Bread for the World, a nonpartisan Christian group that combats hunger, suggested it was reconsidering Yoho's continued membership on its board. Asked about his status, the organization said his recent behavior "does not reflect the values of respect and compassion that Jesus calls on us to exhibit." They said they have asked to speak to him "before we determine any further action."

Pelosi herself weighed in a separate news conference.

Pelosi, who has five children, recounted that during a debate years ago on women's reproductive health, GOP lawmakers "said, on the floor of the House, Nancy Pelosi thinks she knows more about having babies than the Pope."

In an encounter Monday witnessed by a reporter from The Hill, Yoho berated Ocasio-Cortez on the House steps for saying that some of the increased crime during the coronavirus pandemic could be traced to rising unemployment and poverty.

Ocasio-Cortez described it on the House floor Thursday. She said Yoho put his finger in her face and called her disgusting, crazy and dangerous.

She also told the House that in front of reporters, he called her, "and I quote, a fucking bitch." That matched The Hill's version of what Yoho had said. Ocasio-Cortez was not there for that remark.

Ocasio-Cortez said Yoho's references to his wife and daughters as he explained his actions during brief remarks Wednesday actually underscored the problem.

"Having a daughter does not make a man decent. Having a wife does not make a decent man. Treating people with dignity and respect makes a decent man," she said. She added that a decent man apologizes "not to save face, not to win a vote. He apologizes, and genuinely, to repair and acknowledge the harm done, so that we can all move on."

Her voice trembled slightly as she said that her father, "thankfully," was no longer alive to see Yoho's treatment of her. But she said her mother saw it, "And I am here because I have to show my parents that I am their daughter, and that they did not raise me to accept abuse from men."

Other Democrats recalled their own experiences, taunted House Republicans' overwhelmingly white male membership and warned that the numbers of women lawmakers will only grow. Eighty-eight House Democrats and 13 Republicans are women.

"We're not going away," said Rep. Pramila Jayapal, D-Wash. "There is going to be more power in the hands of women across this country." 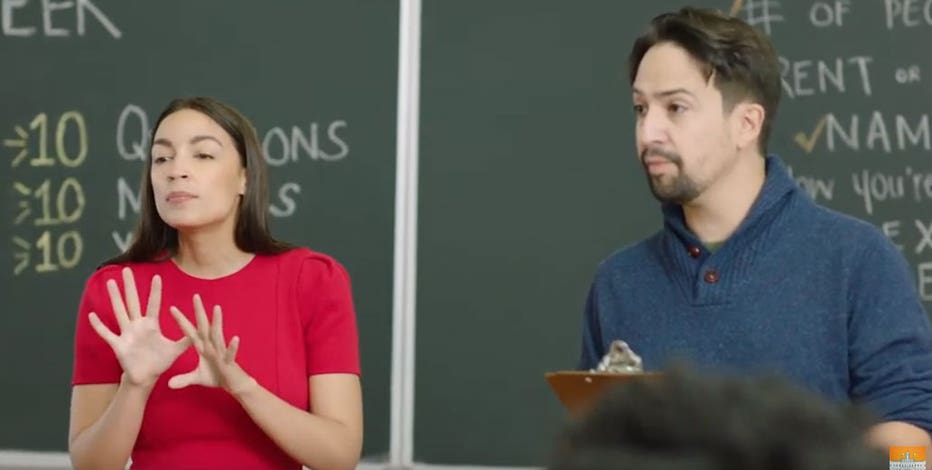 “Hamilton” creator Lin-Manuel Miranda is joining U.S. Rep. Alexandria Ocasio-Cortez in a public service announcement aimed at getting New Yorkers of all backgrounds, including immigrants, to participate in the once-a-decade head count.