Joseph Eskenazi is the oldest living survivor of the Japanese Attack on Pearl Harbor. He will celebrate his 105th birthday on Jan. 30. (Credit: National WWII Museum)

NEW ORLEANS - Flag-waving admirers lined the sidewalk outside the National World War II Museum in New Orleans on Wednesday to greet the oldest living survivor of the Japanese Attack on Pearl Harbor as he marked his upcoming 105th birthday.

"It feels great," Joseph Eskenazi of Redondo Beach, California, told reporters after posing for pictures with his great-grandson, who is about to turn 5, his 21-month-old great-granddaughter and six other World War II veterans, all in their 90s.

Eskenazi turns 105 on Jan. 30. He had boarded an Amtrak train in California on Friday for the journey to New Orleans. The other veterans, representing the Army, Navy and Marines, flew in for the event. 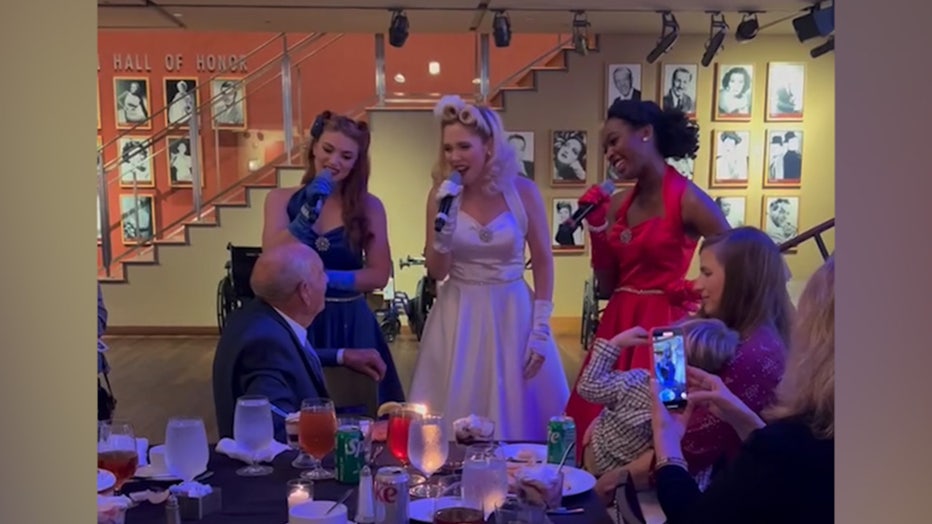 They were visiting thanks to the Soaring Valor Program, a project of actor Gary Sinise’s charitable foundation dedicated to aiding veterans and first responders. The program arranges trips to the museum for World War II veterans and their guardians.

Eskenazi was a private first class in the Army when the attack occurred. His memories include being awakened when a bomb fell — but didn't explode — near where he was sleeping at Schofield Barracks, reverberating explosions as the battleship USS Arizona was sunk by Japanese bombs, and machine gun fire from enemy planes kicking up dust around him after he volunteered to drive a bulldozer across a field so it could be used to clear runways.

Actor Gary Sinise's foundation sent veterans to the National WWII Museum in New Orleans, Louisiana, to treat them to meals, allow them to connect with other veterans, and to be celebrated for their sacrifice to protect the United States' freedom. (Credit: FOX LA)

"I don't even know why — my hand just went up when they asked for volunteers," Eskenazi said. "Nobody else raised their hand because they knew that it meant death. ... I did it unconsciously."

He was at the Army's Schofield Barracks when the Dec. 7, 1941, attack began, bringing the United States into the war. About 2,400 servicemen were killed.

Eskenazi and his fellow veterans lined up for pictures amid exhibits of World War II aircraft and Higgins boats, designed for beach landings.

"Thank you guys for providing us a country that was worth fighting for," veteran Billy Hall, a who rose to the rank of major in the Marines after enlisting in 1941, shouted to well-wishers.

The museum opened in 2000 as the National D-Day Museum and has expanded in size and scope since then.