The man behind a deadly shooting at a Tulsa medical facility had purchased an AR-style rifle hours before fatally shooting four people, Tulsa Police Chief Wendell Franklin said in a press conference on June 2, 2022.

TULSA, Okla. - Hospitals, like schools, are not typically designed to guard against the threat of a determined gunman entering the building to take lives.

The vulnerability of health care facilities was highlighted by a shooter who killed four people and then himself Wednesday at a hospital in Tulsa, Oklahoma. The assailant got inside a building on the Saint Francis Hospital campus with little trouble, just hours after buying an AR-style rifle, authorities said.

Here’s a look at what's known about security at the Tulsa facility and other American hospitals:

DID THE GUNMAN HAVE TO PASS THROUGH SECURITY?

No, the 45-year-old man identified as the shooter, Michael Louis, of Muskogee, Oklahoma, parked his car in an adjoining garage, then went through unlocked doors into the medical building, authorities said. 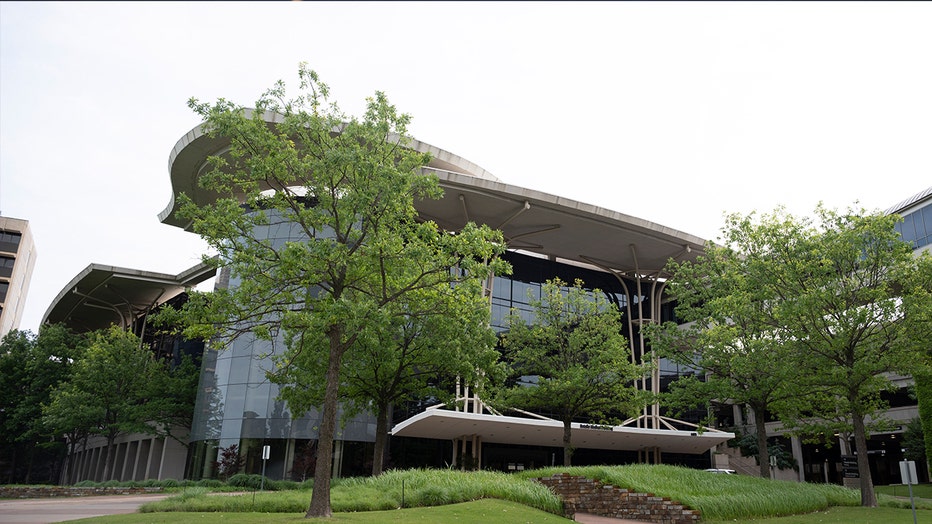 Police guard the entrance to the Natalie Building at the Saint Francis Hospital on June 2, 2022 in Tulsa, Oklahoma. A gunman killed four people in a mass shooting at the Natalie Medical Building on the hospital's campus yesterday. The shooter is also

"It is an entry that is open to the public," Tulsa Police Chief Wendell Franklin told reporters Thursday. "He was able to walk in without any type of challenge."

It was a short walk from that entrance to the office area where Louis fatally shot his primary target, Dr. Preston Phillips. Police said Phillips recently performed surgery on Louis and that Louis blamed the doctor for chronic pain he still suffered.

Once Louis got in, "he began firing at anyone who was in his way," Franklin said. At least one person holding a door open for others to escape was killed.

COULD BETTER SECURITY HAVE STOPPED THE SHOOTER?

The president and CEO of Saint Francis Health System said nothing can stop somebody with guns "hellbent on causing harm."

Dr. Cliff Robertson did not provide details about hospital security. He said the facility has procedures to deal with "difficult, unhappy patients," though he did not elaborate.

Hospital officials planned to review their security procedures in the days ahead. There "will be a thousand questions" to answer regarding the shooting, Robertson said.

From official accounts, the reaction time of officers could not have been much better. Wendell said officers responded to the shooting within minutes and that the shooter apparently killed himself as police approached.

IS IT STANDARD FOR HOSPITALS TO LEAVE SOME ENTRYWAYS OPEN?

Yes, because some urgent medical situations require patients to be moved quickly. But some hospitals, especially ones that have dealt with violence on their grounds, have upgraded security in recent years.

Four people were killed during a shooting at a Tulsa, Oklahoma, hospital Wednesday afternoon, according to police. The suspected gunman is also deceased, officials confirmed.

Mercy Hospital in Chicago beefed up security after a 2019 attack in which a man fatally shot an attending physician who was his ex-fiance in the parking lot. He then entered the hospital, where he shot and killed a pharmacy resident and a police officer before he was fatally shot himself.

Now security officers are stationed at every entrance, and the hospital has a system that electronically notifies employees of any armed intruders.

HOW COMMON ARE SHOOTINGS AT HOSPITALS?

Nearly 60 percent of those shootings were inside hospitals, and around 40 were outside on hospital grounds, the guide said.

The attacks resulted in 235 people wounded or killed, according to the guide, which also cited data from the Bureau of Labor Statistics that indicated violence is four times more likely in health care than in other industries.

WHAT ARE SOME UNIQUE CHALLENGES FOR HOSPITALS?

Some patients have limited mobility, and many staff members are obligated to stay with them in dangerous situations, sometimes making quick evacuations impossible.

Also, hospital buildings are often labyrinths, with many doors that lead to more doors. The Tulsa police chief said that was the case in the shooting on Wednesday, when the building's vastness created echoes, which made it harder for officers and others inside to know precisely where the gunshots were coming from.

WHAT ELSE HAVE HOSPITALS DONE TO IMPROVE SECURITY?

Even before the 2019 shooting at Chicago Mercy, the hospital had begun training employees about what to do during an active gunman situation. That included instructions on retreating into rooms, locking doors and turning out lights.

Training sessions at the hospital that were held annually before the 2019 shooting are now held four times a year, said Paul Stewart, a spokesman for the hospital, which is now called Insight Hospital and Medical Center.

Out of concern about people entering with guns, some hospitals have also installed metal detectors. At Chicago's UI Health, which is affiliated with the University of Illinois, metal detectors were installed in the emergency room, though not nearly as many as nurses and other health care workers asked for.

Nurses complain that patients entering with guns are far too common.

"They did that after someone brought in a semi-automatic weapon and was actually making a video on his phone about how he was going to kill nurses," said Paul Pater, a nurse at the hospital.