Trump vows to get tough

President Trump said governors must restore order otherwise he will deploy the military to handle looters and rioters.

As protests grip the nation, officers have doused crowds with pepper spray, struck protesters with batons, steered police cars into throngs, shoved demonstrators and screamed curses. Some police action has been directed against people smashing windows, breaking into stores and burning cars, but many find other instances more difficult to understand — like the elderly man knocked over by police as he walked with a cane on a Salt Lake City sidewalk.

The protests began after the May 25 death of George Floyd, a black man who died in Minneapolis after a white police officer who is now charged with murder, Derek Chauvin, pressed his knee into Floyd's neck for several minutes even after he stopped moving and pleading for air.

Now, some are questioning whether tough police tactics against demonstrators are actually making the violence worse rather than quelling it. 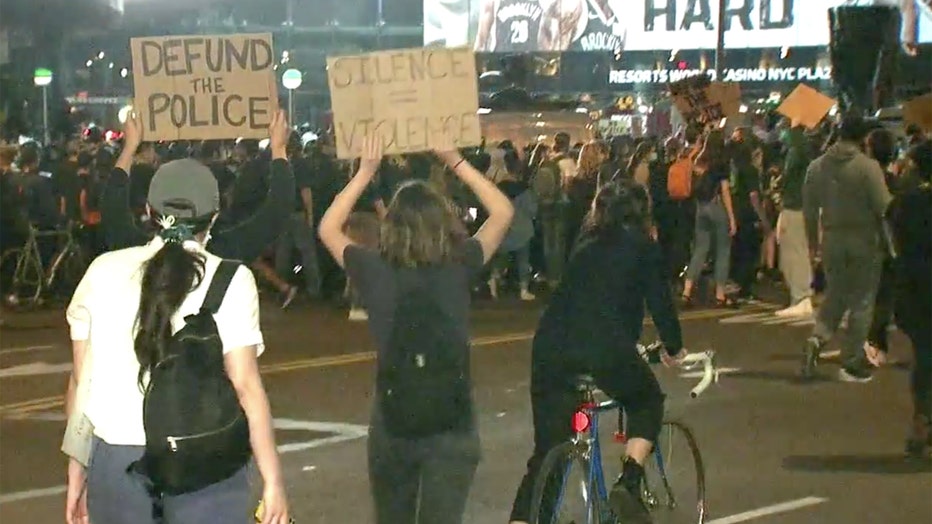 While the protests and subsequent police interactions may be shocking to some, many African Americans aren't surprised because they've endured police brutality for decades, said Chris White, director of the Detroit Coalition Against Police Brutality.

"What's happening, it's the way American society has always been," White said.

U.S. Rep. Joyce Beatty, who was hit by pepper spray Saturday as scuffles broke out near the end of a demonstration in Columbus, Ohio, said police escalated matters by using heavy-handed tactics against "passionate" young demonstrators who were mostly orderly.

"Too much force is not the answer to this," said Beatty, who pressed for peaceful tactics on both sides in a video posted on Twitter by Columbus City Council president Shannon Hardin, who also was pepper-sprayed. Both are African American. 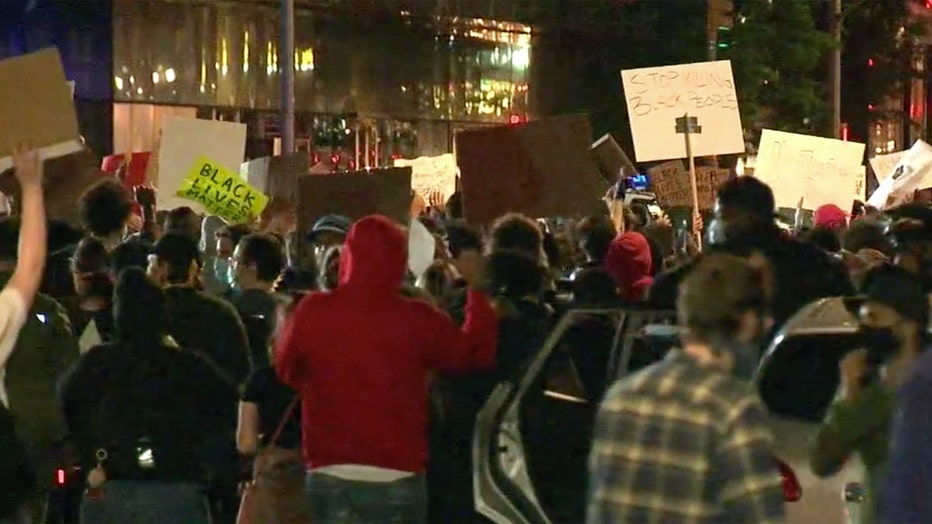 In Salt Lake City, a police officer shoved and knocked over an older man who was walking with a cane on a sidewalk near a protest. Another officer stepped in within seconds to assist the man, as did the officer who knocked him down. Police Chief Mike Brown issued a video Sunday saying he'd personally apologized to the man.

"It was hard for me to watch what happened, and I know it was even harder for him to experience it," Brown said.

In New York, where video showed two police vehicles driving into a crowd, knocking aside demonstrators, Mayor Bill de Blasio decried what he called "structural racism" that leads to violence against minorities, but also defended police.

"It is inappropriate for protesters to surround a police vehicle and threaten police officers," he said. "That's wrong on its face and that hasn't happened in the history of protests in this city."

Two police officers in Atlanta were fired and three others placed on desk duty over excessive use of force during a protest incident involving two college students Saturday night. Mayor Keisha Lance Bottoms said Sunday that she and the police chief made the decision after reviewing body-camera footage.

Footage shown on TV as captured by local reporters shows a group of police officers in riot gear and gas masks surround a car being driven by a man with a woman in the passenger seat. The officers pull the woman out and appear to use a stun gun on the man. They use zip-tie handcuffs on the woman on the ground.

In a message some saw as encouraging police violence, President Donald Trump praised U.S. Secret Service officers guarding the White House amid demonstrations and said any protesters who breached its fence would face "the most vicious dogs, and most ominous weapons, I have ever seen. That's when people would have been really badly hurt, at least."

In a letter titled "Dear America," civil rights leader Rev. William Barber II, a pastor at Greenleaf Christian Church in Goldsboro, North Carolina, said protesters have the right to decry "brutal and inhumane" treatment at the hands of police.

"What if, instead of a President who tweets 'when the looting starts, the shooting starts,' we had leadership that could unequivocally say, 'When you use police power in the name of the state to murder, lynch, and destroy, you will be prosecuted for your crimes,'" Barber wrote.

The Minnesota Department of Public Safety sent a tweet Saturday saying it would strengthen its response to "a sophisticated network of urban warfare." Hours later, video emerged of police shooting paint projectiles at people gathered on the front porch of a home after curfew in Minneapolis. "Light 'em up," a man is heard saying before the shooting began. No one appeared seriously injured.

"I don't know what's going to happen over these next few days in this country because they want these killer cops arrested and they're not going to stop until they are," Williams said, referring to the lack of charges against the other three officers at the scene when Floyd's neck was pinned under Chauvin's knee. "People are just sick and tired of being in this predicament, where innocent life has been taken at the hands of those who were to protect and serve us. We have not been heard."

Some protesters are increasing efforts to protect themselves. On Sunday, Black Lives Matter organizers in Tampa, Florida, had nearly 100 safety marshals in fluorescent vests patrolling their march, trained in de-escalation tactics. The group also had medics and enlisted lawyers and those with legal training to watch out for protesters' rights from the sidelines.

In New York, a police labor group, the Detectives' Endowment Association, noted some police there had been attacked and patrol cars set ablaze.

"As we do everything to stop NYC from burning, all we hear from elected officials is criticism," the group tweeted. "Maybe they should try it on the front lines."

Reeves and Stafford are members of the AP's Race and Ethnicity team. Reeves reported from Birmingham, Alabama, and Stafford from Detroit. AP writers Kate Brumback in Atlanta and Kelli Kennedy in Fort Lauderdale, Florida, contributed.