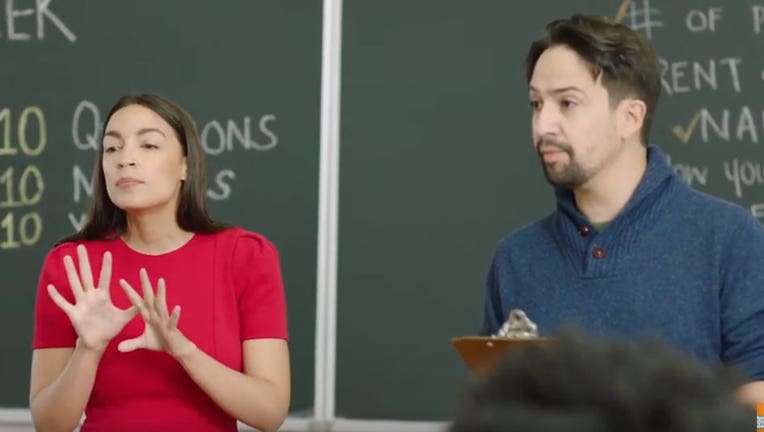 NEW YORK - “Hamilton” creator Lin-Manuel Miranda is joining U.S. Rep. Alexandria Ocasio-Cortez in a public service announcement aimed at getting New Yorkers of all backgrounds, including immigrants, to participate in the once-a-decade head count.

The PSA unveiled Thursday on social media begins with Ocasio-Cortez speaking in front of a classroom of students from diverse backgrounds.

“The census is a count of everyone in the United States, no matter your immigration status,” Ocasio-Cortez says.

The PSA was filmed in English and Spanish but will be shown with subtitles in 11 other languages. It is debuting first on social media and will start airing on New York television stations in March as part of New York City's $40 million outreach effort to get everyone to answer the 2020 census form when it becomes available in two weeks.

Officials with New York City said that the self-response rate of New Yorkers during the 2010 Census was barely 62%, well below the national average of 76%. The goal for the city is to get response numbers even higher for Census 2020.

The PSA with Miranda and Ocasio-Cortez stresses the confidentiality of responses and the fact that immigration status doesn't matter, said Julie Menin, director of NYC Census 2020, the outreach initiative started by New York Mayor Bill de Blasio. That, she said, is because there's been confusion about whether people would be asked if they are citizens.

The Trump administration tried to add the citizenship question to the form, but the U.S. Supreme Court blocked it last summer.

New York City has large numbers of immigrants, residents who don't speak English and renters — all considered hard-to-count populations. In the 2010 census, less than 62% of city residents answered the census questions on their own, compared with the national average of 76%.

“We now have to communicate very clearly to immigrant communities that the question is off the census," Menin said.