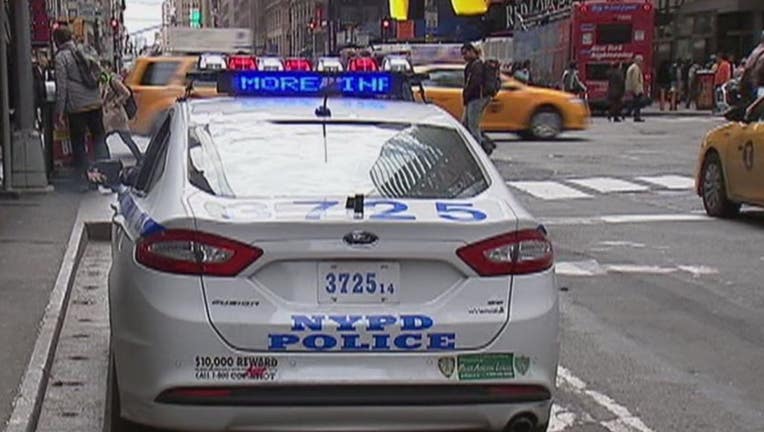 Officer Carmine Simpson chatted with at least 46 minors via Twitter since last April, prosecutors said, collecting 18 photos and 33 videos of children he instructed to act in a sexually suggestive manner, along with dozens of other images used for sexual arousal.

A judge ordered Simpson jailed without bail pending trial, saying the 26-year-old officer from Long Island was more of a danger to the community than typical child pornography defendants because he allegedly encouraged some of the victims to cut, choke or hit themselves, sometimes with a knife or belt.

"One of the major concerns I have is that this is not a one-off incident here," said U.S. Magistrate Judge A. Kathleen Tomlinson. "This series of events went on for months and months. There's a pattern that clearly was established here."

Because police officers are seen as targets for violence behind bars, Simpson is being held in protective custody at the Metropolitan Detention Center in Brooklyn, the same federal lockup where Jeffrey Epstein's longtime associate Ghislaine Maxwell is awaiting trial.

Simpson did not enter a plea to the charge of producing child pornography, which carries a mandatory minimum sentence of 15 years in prison if he is convicted.

At an initial court appearance conducted by video because of the coronavirus pandemic, Simpson's lawyer, Todd Greenberg, said he and his client understood the "seriousness of the allegations" and that Simpson would plead not guilty at a later date.

Simpson, the son of a retired officer, joined the NYPD in October 2018 and was assigned to a precinct in eastern Brooklyn. FBI agents searching his Holbrook, Long Island home on Thursday seized his weapons.

Sergeant Edward Riley, a police spokesperson said the allegations against Simpson are "reprehensible" and that the department "has zero tolerance for any officer who would endanger children or betray his oath in such a manner."

In Simpson's criminal complaint, an FBI agent wrote that authorities were alerted in December to Simpson’s alleged conduct by National Center for Missing and Exploited Children after it become aware of a Twitter account with names like "LifeOfChris69" that was being used to target minors.

Simpson often pretended to victims that he was 17 and used a filter to distort photos he shared on Twitter so that he would look younger, the complaint said.

In an example detailed in the complaint, Simpson is accused of messaging a person who appeared to be a 13-year-old girl for several weeks in September, asking her to engage in simulated sex through the FaceTime app and compelling her to send him a short video of herself engaged in a sexual activity.

In another example, Simpson chatted for several months with a person who appeared to be a 15 years old, encouraging her to send him selfie photos after writing explicit words on her body. One of the things Simpson told her to write, according to the criminal complaint, was a phrase starting with his first name, Carmine.

This story has been corrected to show that Officer Carmine Simpson is 26 years old, not 27.