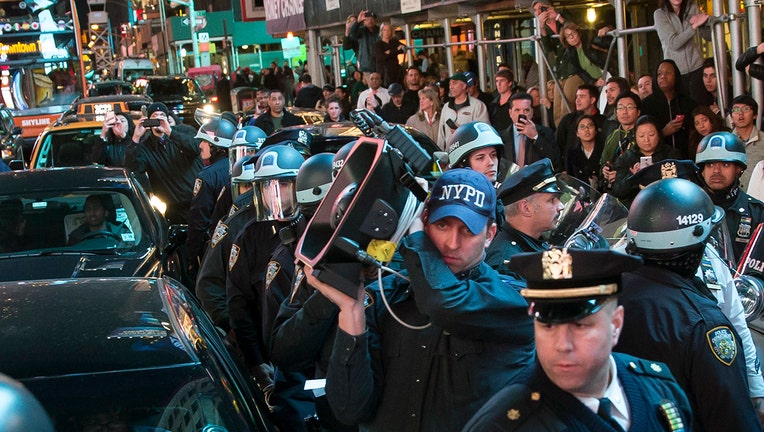 NEW YORK (AP) - The New York Police Department has agreed to limit its use of sound cannons on crowds, ending a five-year legal battle over claims that the devices caused hearing damage, dizziness and migraines.

In a settlement agreement filed in federal court on Monday, the police department said it will no longer use an "alert tone" setting in which the devices emit a series of sharp, painful beeps to disperse crowds.

The department is still permitted to use handheld and vehicle-mounted sound cannons to make announcements and play recorded messages but must make reasonable efforts to do so at a safe distance, according to the agreement.

Several people, including activists and a photographer, sued the NYPD in 2016 over the use of sound cannons, formally known as Long Range Acoustic Devices, during 2014 protests over the police chokehold death of Eric Garner. The lawsuit alleged that the use of the devices, first developed for military use, constituted excessive force.

One of the plaintiffs, Anika Edrei, said in a statement: "Although it moves slowly, we have finally acquired some justice for protestors. Being an activist myself, I hope that the people feel a more protected going out to actions and events."

A message seeking comment was left with the NYPD.

New York City, on behalf of the police department, had vigorously fought the lawsuit and sought intervention from the Supreme Court after the 2nd U.S. Circuit Court of Appeals ruled in 2018 that NYPD and its officials were not entitled to immunity.

Under the settlement agreement, the police department will amend its Administrative Guide and training materials to include its new rules for using sound cannons.

Among other changes, officers must get authorization from a supervisor, department lawyer or the commanding officer of the disorder control unit before using the devices, and all uses must be tracked in a log. Violating the new policies could result in internal disciplinary action, according to the settlement.