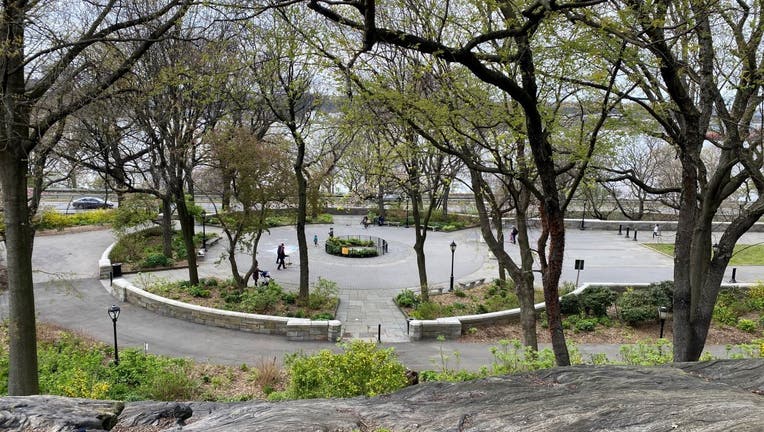 Riverside Park is mostly empty during the coronavirus pandemic on April 20, 2020 in New York City. (Photo by Rob Kim/Getty Images)

NEW YORK - The New York City Parks Department announced Wednesday that 16 park spaces across the city will be renamed in honor of the Black experience in the city.

"Our parks and greenspaces are critical community spaces, and these renamings in honor of the Black experience are physical reminders of the contributions and legacies of Black New Yorkers across our city," said Mayor Bill de Blasio. "I thank NYC Parks for their commitment to maintaining and creating these beautiful green spaces for all New Yorkers to enjoy and for their tireless work on racial justice."

The newly named parks include some of the most notable names in African-American history, from Malcolm X to Gil Scott-Heron and Lena Horne.

The full list of parks/facilities which have had their names changed are:

Constance Baker Motley, born in 1921, was the first African American woman to become a federal judge and was a leading jurist and legal advocate during the civil rights movement. She was also the first black woman to serve as Manhattan Borough President.

One of America's foremost novelists, literary critics, and scholars and best-known for his novel "Invisible Man," Ralph Ellison was a long-time resident of West Harlem.

Percy Sutton was an activist and lawyer during the Civil Rights movement, representing clients like Malcolm X. He also served as Manhattan Borough President from 1966-77.

Lorraine Hansberry was a playwright and writer who authored "A Raisin in the Sun" and was the first African American female to have a play performed on Broadway.

Born in Bedford-Stuyvesant, Brooklyn, Lena Horne was a trailblazing dancer, actress, and singer in theater, film, and television.

James Forten was a prominent abolitionist and vice president of the Anti-Slavery Society. During the Revolutionary War, he was temporarily imprisoned at Brooklyn’s Wallabout Bay near what is today the Navy Yard.

The Parks Department says it is planning to formally rename Mullaly Park in honor of Rev. T. Wendell Foster in September 2022. Rev. Foster was the pastor of the Christ Church in Morrisania. He was the first black representative from the Bronx in the City Council, where he championed low-income housing and served as long-time chair of the Parks Committee.

Gil Scott-Heron was a pioneering soul and jazz poet, musician, and author. As a young man he attended DeWitt Clinton High School and the Fieldston School in the Bronx.

Born Stokeley Carmichael, Kwame Ture, graduated from the Bronx High School of Science, and was a prominent activist and organizer during the Civil Rights era and leader in the Black Power movement.

Mabel Hampton was a prominent lesbian activist and dancer during the Harlem Renaissance. She was also a philanthropist and lived with her long-time partner Lillian Foster for decades on 169th Street in the Bronx.

The oval is named in honor of the numerous notable African Americans and Black luminaries in the jazz world including Ella Fitzgerald, Count Basie, and Lena Horne.

Gwen Ifill was born in Jamaica, Queens, and was a leading journalist, television broadcaster, and author. She was the first African American woman to anchor a nationally televised U.S. public affairs program, Washington Week in Review. Later, she co-anchored PBS NewsHour.

Malcolm X was a leading civil rights activist, African-American Muslim leader and spokesman for the National of Islam.

Moses and Sylas Harris were brothers and freed Black farmers who settled the community in southern Staten Island known as Harrisville or Sandy Ground.

Audre Lorde was a Black lesbian feminist, activist and writer. She lived on Staten Island from 1972-1987, and at the time of her death she was the New York State poet laureate.