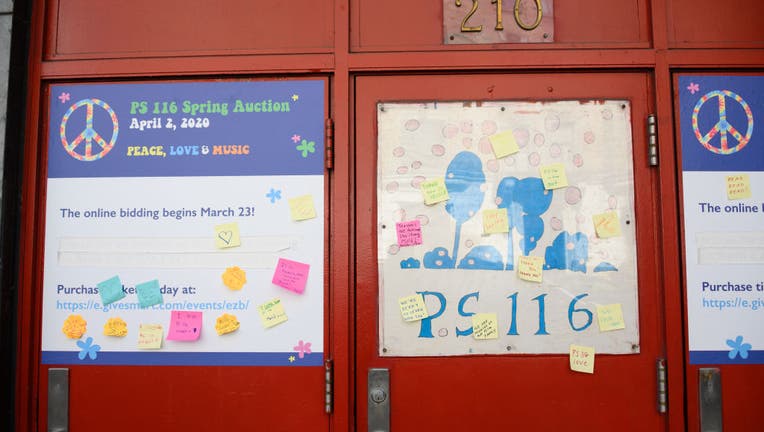 A view of notes left outside P.S. 116 Manhattan school as the coronavirus continues to spread across the United States on March 27, 2020 in New York City. (Photo by Noam Galai/Getty Images)

NEW YORK - According to an statement by the New York City Department of Education, remote learning will continue for students and teachers through Spring Recess, which was originally scheduled for April 9 through April 17.

“For the health and wellbeing of all New Yorkers, the City and the State are in agreement that schools must continue to offer remote learning, including during days that were previously scheduled as breaks. As a result, our schools will continue with remote learning through the time originally scheduled for Spring Recess,” Schools Chancellor Richard Carranza said in the statement. “We know that many New Yorkers plan to observe religious holidays on April 9 and 10. Any students and school staff who individually wish to observe those holidays may do so. However, these days will not be considered “days off” for the school system, and remote learning activities will continue for students who are not observing the holidays.”

The announcement was decried by the United Federation of Teachers, saying in an email to members that Mayor Bill de Blasio is not recognizing how hard teachers have been working during the coronavirus pandemic.

“I can assure you that there has been an outpouring of thanks from parents and from first responders and health care workers,” said UFT President Michael Mulgrew. “Meanwhile, the silence from City Hall has been deafening. Never once during this crisis has the mayor thanked you for your service. Instead, he diminishes your work by describing it only as a vehicle to keep children at home.”

New York City schools are ordinarily closed for the beginning of Passover and Good Friday.

The city’s schools have been closed since March 16, and Mayor de Blasio said that they would remain closed until at least April 20, he expected them to remain closed for the rest of the school year.