Coney Island is ready for the summer

NEW YORK - A gaggle of elected officials gathered on the Coney Island boardwalk on Thursday to welcome the unofficial return of summer ahead of all eight public and free beaches managed by New York City's Parks Department opening to swimming on Saturday, May 28, 2022.

"We ask that you never go into the water when there’s no lifeguard on duty," Parks Commissioner Susan Donoghue warned while inviting the entire region to walk the boardwalk, take a dip, have a hot dog, and ride some rides — most of which open Friday. She recommended Dino's Wonder Wheel, the world-famous Cyclone, and the rides at Luna Park.

Lifeguards will be on duty at all beaches every day from 10 a.m. to 6 p.m. through Sunday, Sept. 11, 2022. The Parks Department said that swimming is "unsafe and strictly prohibited" at all other times. Indeed, officers can and do issue summonses to people swimming after hours when lifeguards aren't on duty.

Travel + Leisure has named the 25 best beaches in the United States. Two beaches in New York City, one in New Jersey, and one in Connecticut made the cut.

The safety risk is not overstated; nearly every year, swimmers drown at the city's beaches, especially at Rockaway Beach and Coney Island where dangerous rip currents can be unpredictable.

The Health Department monitors the water quality at the beaches. You can check the reports at the Beach Water Quality portal.

By the way, New York City also has public beaches and waterfront parks managed by either the National Park Service or the New York State Parks Office but some of these sites do not allow swimming.

The city-owned beaches, located in four of the five boroughs, have 14 miles of coastline. 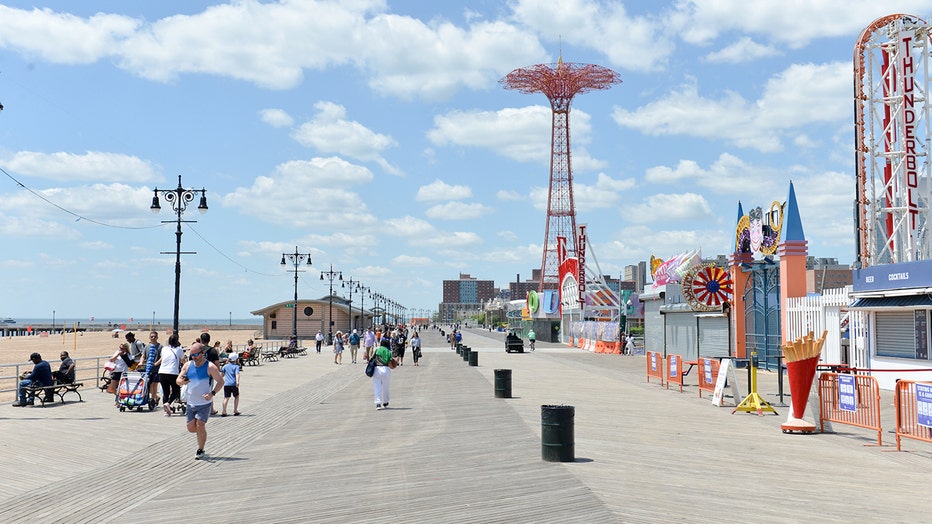 The Coney Island Boardwalk in Brooklyn, May 2021. (NYC Parks and Recreation File Photo)