"This is pure hate, unmasked. If they think this is going to intimidate us, they’re mistaken." 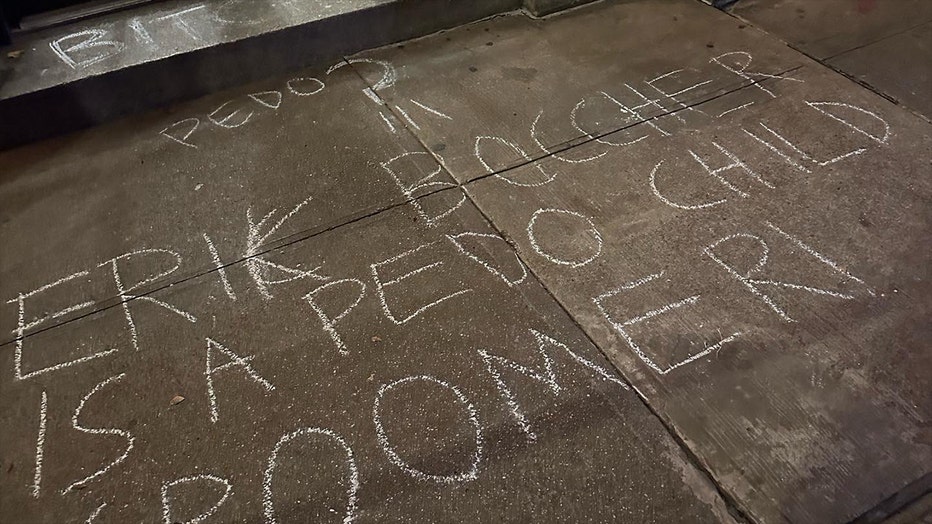 Graffiti is seen on the ground outside of NYC Council Member Erik Bottcher's Manhattan building.

Bottcher says that the building super called the police and two people were arrested for trespassing.

In a Twitter post, he stated:  "This is pure hate, unmasked. If they think this is going to intimidate us, they’re mistaken. Our resolve is strengthened."

He also shared a video that he says shows protesters physically attacking one of his neighbors outside of the building.

The Post reported that the two protesters that were arrested were Erica Sanchez, 44, of the Bronx and Anna Morgan, 27, of Queens.

Mayor Eric Adams called the incident "completely outrageous" and thanked the NYPD for sending the message that hate will not go unchallenged.

Earlier in the day, Bottcher said that the hallway outside his district office was vandalized.  In photos, he posted on Twitter, graffiti had twisted Bottcher's name to "Bitcher" on the walls.

Monday's incident came after protesters had tried to shut down a Drag Story Hour at a branch of the New York City Public Library in the Chelsea section of Manhattan on Saturday.

Bottcher was at that event and shared images and video of the protesters outside the building.