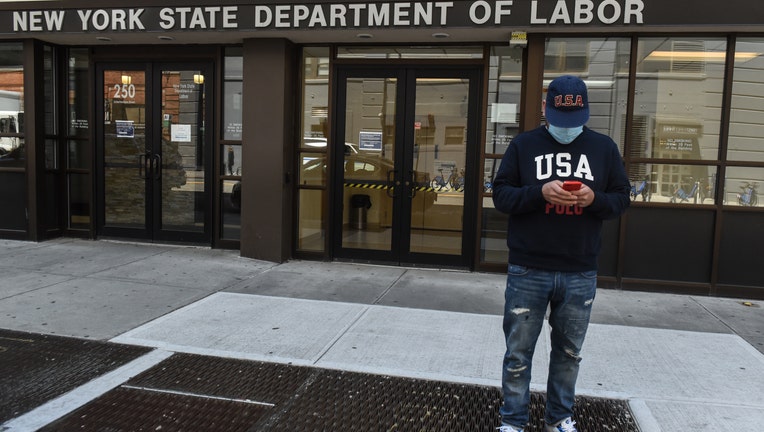 FILE - A man stands in front of the closed offices of the New York State Department of Labor on May 7, 2020.

ALBANY, N.Y. (AP) - New York’s labor commissioner says the state is ready to rapidly ramp up its unemployment system again in case the pandemic surges and the economy must shutter once again.

The coronavirus pandemic has taken the lives of tens of thousands of New Yorkers and efforts to reduce its spread by closing businesses in New York City and state forced millions out of work. The state had an unemployment rate of 15.7% in June, up from 3.9% a year earlier.

“We are ready,” state Labor Commissioner Roberta Reardon said during a Thursday legislative hearing. “We know that should the second wave come, we know where the pain points are.”

New York has doled out $40 billion in unemployment benefits to 3.3 million New Yorkers in over five months, up from $2.1 billion in benefits processed in all of 2019. Over a third of the state’s unemployment claims came from workers in particularly hard-hit industries: retail, accommodation and food services, and health care and social assistance.

“We have paid over 18 years worth of benefits in just over five months. That’s staggering and sobering,” Reardon said.

Cuomo, who said Trump's order poses “serious legal questions,” estimates it would cost $4 billion for New York to comply with the president’s executive order between now and December.

Reardon said federal funding covers about three-fourths of the unemployment assistance provided this year, and that New York is borrowing $5 billion interest-free from the federal government to pay out unemployment benefits. New York is one of 11 states who applied and received approval for that loan, which provides advances on unemployment insurance.

“This economic crisis is greater than anything we’ve seen since the Great Depression, and every state is struggling,” she said.

Reardon said her labor agency received as many as a million phone calls in a day this spring. But about three out of four applications were processed without any need for the state to follow up with individuals seeking unemployment, she said.

Still, the surge in applications led to scores of complaints as individuals waited weeks for benefits and struggled with a website that was updated by late April. Reardon said most of the 30,000 complaints were resolved quickly, but state lawmakers said Thursday that initial delays left out-of-work New Yorkers confused and bereft.

“People waited months and months to get benefits,” said Sen. James Skoufis, a Democrat in Hudson Valley. “They simply didn’t know how to make ends meet.”

The Labor Department hired 500 workers and brought in thousands of employees from other state agencies to help staff call centers that began to operate seven days a week during the height of the pandemic.

Now, Reardon said few claims are older than three weeks, and said most are due to ongoing problems with verifying individuals and ensuring they’re submitting needed certification.

Reardon said federal guidance was unclear early on, but said the state’s updates to its unemployment system and website — including use of chatbots to answer questions, help from Google to revamp the website, and additional computer servers — has helped.

“More than anything else we are telling people you do not have to call us in order to complete your claim,” she said.

“Our constituents are still in the midst of challenges dealing with the Department of Labor itself,” said state Sen. Shelley Mayer, a Democrat whose district includes suburban Westchester County. “I don’t think we should minimize and pat ourselves on the back because we’re not in a perfect situation.”

State Republican lawmakers said the government should protect businesses who fear they’ll be forced to pay higher payroll taxes as a result of laying off more workers.

Reardon said Cuomo has allowed her agency to look into the issue, and said the agency will release recommendations soon.

“We understand that businesses are under a tremendous amount of pressure,” she said.