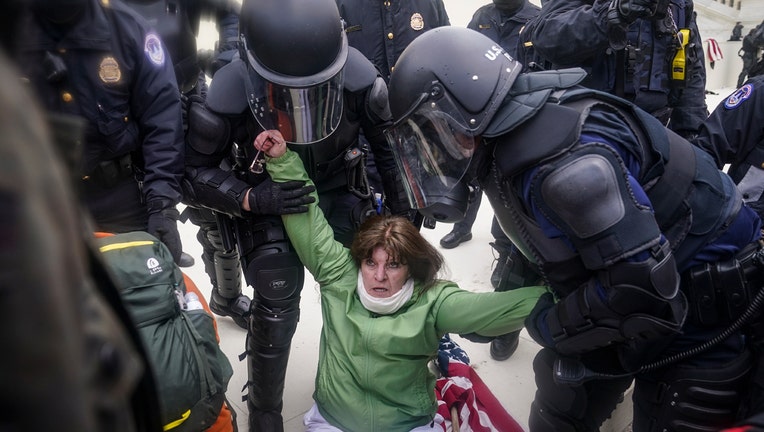 Police officers help a woman, later identified as Sharon Pineo, get up during a violent riot at the U.S. Capitol in Washington, Wednesday, Jan. 6, 2021. (AP Photo/John Minchillo)

MALTA, N.Y. (AP/FOX 5 NY) - A member of a zoning board of a town in upstate New York resigned after she was identified in photos taken at the U.S. Capitol on the day extremists, conspiracy theorists, and supporters of President Trump stormed the building.

Sharon Pineo resigned from the Malta Zoning Board of Appeals on Monday in a letter sent to the town supervisor, the Times Union reported.

"I tender this resignation with regret but believe that in these challenging times, it is important not to allow any impediment to the smooth operation of the town business," Pineo wrote, adding that it was her honor to serve on the board.

In one photo taken near the Capitol, Pineo is seen sitting on the ground in a green jacket surrounded by police officers who are holding her arms, the newspaper reported. In a second photo, officers walk beside her as her arms are handcuffed behind her back.

The Times Union didn't find any evidence that Pineo has been charged with a crime. Pineo did not respond to calls and emails from the newspaper.

Malta is located about 30 miles north of Albany, near Saratoga Springs. In a Facebook post from December, Pineo wrote that she was organizing a bus for supporters of President Donald Trump to travel from the area to Washington on Jan. 6.

The Zoning Board of Appeals' website still lists Pineo as a member as of Wednesday afternoon. The Town Board appoints members to the zoning board. The seven members serve five-year staggered terms, according to the website.

The cover image on Pineo's personal Facebook page is an illustration of Trump genuflecting before Jesus Christ, whose left hand is on the president's shoulder. Pineo's privacy settings don't reveal any recent content she may have posted.

Our President Trump fought for us, against all odds, for four turbulent years. He is now broadcasting a plea for us to come to his aid.

Congress will meet on January 6th to decide the future of our nation by certifying the Electoral College results.

Our President asks that we, the people, assemble at the Capital [SIC] to declare to Congress that we do not support a stolen election.