Ahead of the team's home opener, the New York Mets unveiled a statue of Hall of Famer Tom Seaver outside Citi Field.

NEW YORK - The New York Mets 2022 home opener against the Arizona Diamondbacks was one of the most anticipated in the team's history.

Before the game Friday afternoon, a statue honoring legendary player Tom Seaver was unveiled. A ceremony took place outside the ballpark with the late Hall of Famer's family in attendance. Mike Piazza and owners Steve and Alex Cohen also attended.

The sculpture by William Behrends — who also designed and created statues of Willie Mays in San Francisco and Tony Gwynn in San Diego — weighs 3,200 pounds (2,000 pounds of bronze and 1,200 pounds of structural stainless steel). The granite pitcher's mound came in nine pieces that weighed 33,600 pounds and added about 3 feet in height.

"Hello, Tom," said his emotional widow Nancy, choking back tears. "It's so nice to have you here where you belong."

Chris Bassitt, who arrived last month in a trade with Oakland, made his Citi Field debut.

The Mets are coming off a 9-6 win against the Phillies Wednesday.

Pete Alonso drove in five runs with a homer and two doubles.

"I just wasn’t completely executing every pitch where it needed to be," Scherzer said. "Fortunately enough to be able to walk three in an inning to not have that spiral out of control and give up a bunch of runs in that situation. That really set a tone and allowed our offense to get going." 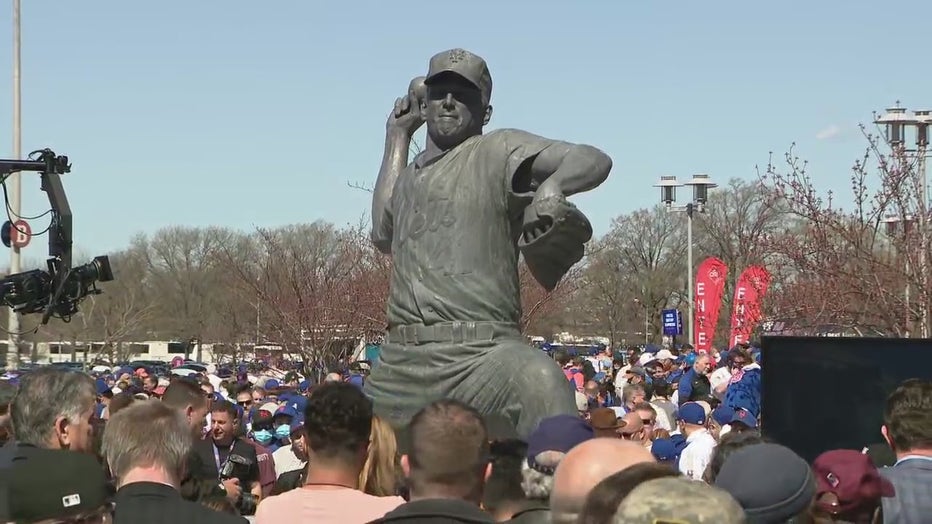 Alonso and the rest of New York's offense provided more than enough run support for the 37-year-old three-time Cy Young Award winner. Brandon Nimmo hit a solo home run off Aaron Nola in the third inning — the first Mets hit of the afternoon — before the middle of the order teed off in the fourth and fifth.

"We did an excellent job of pouring it on all day," said Alonso, who was again the designated hitter instead of his preference to play first base. "We had excellent at-bats one through nine, and that’s what it takes to win these tough, divisional games."

Alonso's first RBI double helped knock Nola out of the game. The right-hander also lost command in the fourth, walking a batter and hitting two more to load the bases and get the hook from manager Joe Girardi. Nola (1-1) allowed three earned runs on three hits in 3 1/3 innings.

The Mets also knocked around the Phillies bullpen, which went five relievers deep after Nola's short start and with an off day coming up. Alonso drilled a three-run homer run to right-center in the sixth to make it 8-1 and close Scherzer's day after throwing 96 pitches.

"That was a big moment in the game that kind of put us ahead by a bunch, and thankfully that was enough," Alonso said. "Philly has a great offense. They’re a great team. They started to come back there. But I feel like coming through like that for the team was huge."

All nine batters who started the game for New York reached base at least once. Philadelphia got to the Mets bullpen in the later innings, with Nick Castellanos hitting an RBI double and reigning NL MVP Bryce Harper launching his first home run of the season to make it interesting before Edwin Diaz closed it out.

Phillies second baseman Jean Segura left in the sixth after getting hit by a pitch in his left forearm. He walked to first base and was attended to by a trainer before coming out of the game.

After the game, the Phillies optioned right-hander Connor Brogdon and left-hander Damon Jones to Triple-A and activated right-hander James Norwood off the bereavement list.

Showalter flipped Francisco Lindor into the second spot in the lineup with Starling Marte batting third. Lindor doubled and scored in the fifth, while Marte had an RBI single in the sixth.

Closer Corey Knebel's return from the COVID-related injured list meant the end of 28-year-old journeyman reliever Jeff Singer's brief time with his hometown Phillies. The South Jersey native who was working with his father at a Northeast Philadelphia car dealership in 2016 when the team signed him got to sit in the bullpen Tuesday night and had dozens of friends and family in attendance for his first game in a major league uniform.

"He got to fulfill a lifetime dream, and I think that was a special day for him," Girardi said. "It could be just the start of things to come."

Mets: Showalter hopes right-handed reliever Trevor May can dodge the injured list with a minor triceps strain and expects the right-hander to benefit from the team's day off Thursday.

Phillies: OF Odúbel Herrera (strained right oblique) began a rehab assignment at Single-A Clearwater on Tuesday. Girardi said Herrera got four at-bats in his first game with the Threshers as the designated hitter and was scheduled to play five innings in center field Wednesday.