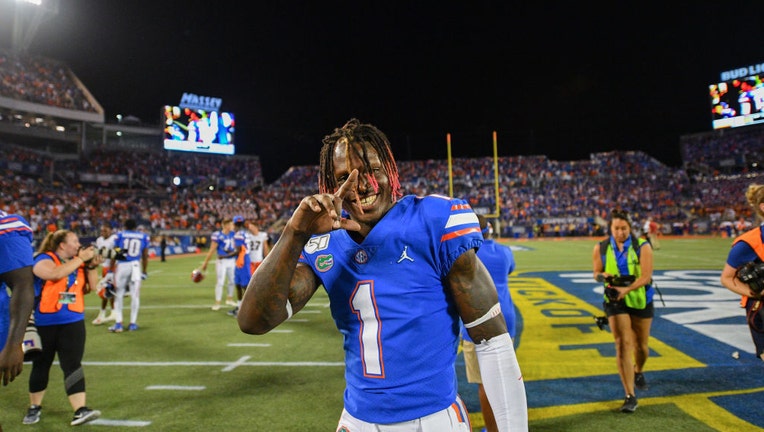 ORLANDO, FL - AUGUST 24: Kadarius Toney #1 of the Florida Gators celebrates after winning against the Miami Hurricanes in the Camping World Kickoff at Camping World Stadium on August 24, 2019 in Orlando, Florida.(Photo by Mark Brown/Getty Images)

NEW YORK - Dave Gettleman traded down in the first round for the first time in his long career as a general manager, and the New York Giants found help for quarterback Daniel Jones and came away with draft assets for this year and next.

After dropping nine spots in a surprising trade with Chicago Bears on Thursday night, the Giants drafted Florida wide receiver Kadarius Tony with the 20th pick overall and gained three extra picks, including first and fourth-rounders in 2022.

The Giants' deal with the Bears came right after Philadelphia and Dallas swapped the 10th and 12th picks. The Eagles took Heisman Trophy winner DeVonta Smith, the Alabama wide receiver who many predicted would be taken by New York.

"They made the trade and and we decided to trade back at that point," Gettleman said.

In addition to the first-round picks this year and next, the Giants got a fifth-round pick this year and a fourth-rounder in 2022. Chicago picked Ohio State quarterback Justin Fields.

Next year's draft is expected to be deep because many college players have decided to stay in school since the NCAA did not count this past season as part of their eligibility.

Toney, who can change direction at top speed, is more versatile than polished as a receiver. He was a dual-threat quarterback during his final two seasons of high school. He had 70 catches for 984 yards and 10 touchdowns this past season.

"He has excellent athletic ability," said Chris Pettit, the Giants director of college scouting. "He’s versatile. That’s what we like about him. But like every player in the draft, he’s raw. Every player in this draft and every draft has to develop into a pro. So it’ll take some time. But this guy is a playmaker with the ball in his hands."

While Toney had a good season, he was overshadowed somewhat by Gator tight end Kyle Pitts, who went fourth overall to Atlanta.

The last time the Giants made a trade in the first round was with Pittsburgh in 2006. New York dropped from 25 to 32 and selected Boston College defensive end Mathias Kiwanuka, who was part of two Super Bowl championship teams with New York.

The Giants head into Friday's second and third rounds still needing an edge rusher, a cornerback and a guard.

The Giants were among the most aggressive teams during free agency last month, signing 16 players. The big money was spent on playmaking wide receiver Kenny Golladay and cornerback Adoree Jackson.