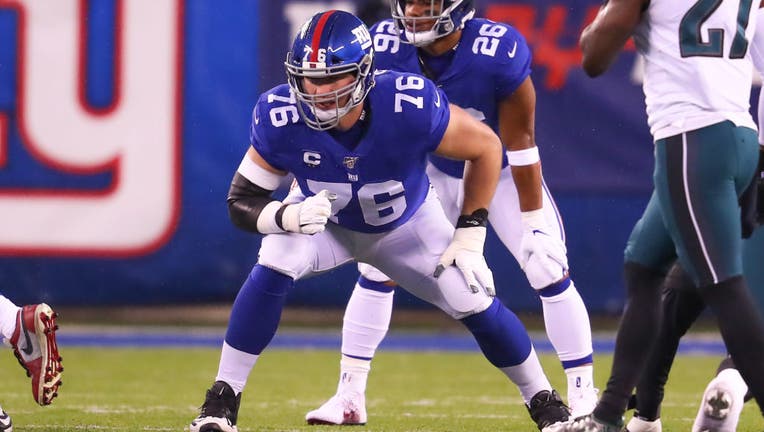 NEW YORK - New York Giants tackle Nate Solder has announced that he will opt out of the 2020 NFL season due to the coronavirus pandemic.

Solder, who started every game for the Giants over the last two seasons, made the announcement on Twitter on Wednesday afternoon, citing health concerns including his son’s ongoing fight with cancer, his own history with cancer, and the recent birth of a baby boy.

"My family and I have been praying, wrestling and listening to God about our current circumstances and whether it is best that I play football this season," Solder said in a statement posted on Twitter. "Our primary goal is to pursue God and listen to the Holy Spirit in everything we do. As hard as that can be and as daunting as what He asks us to do can seem, we have come to believe, trust and wait on the Lord. That is why we have chosen to pause for this season. Our family has health concerns, most notably our son's ongoing battle with cancer, as well as my own bout with cancer. We also welcomed a new addition to our family this spring, a baby boy. With fear and trembling, we struggle to keep our priorities in order and, for us, our children's health and the health of our neighbors comes before football. We fully recognize that being able to make a decision like this is a privilege. I will deeply miss my teammates, coaches and everyone in the Giants organization. I want to thank them and all my friends and fans who continue to support me and my family through the highs and the lows. As scary and bleak as it sometimes can be, we know that the God of the universe has all things under His control, and His plans are and will always be for our good."

Under the agreement reached last week between the NFL and the players’ union, players can choose not to play in 2020 without penalty. The opt-out is irrevocable.

The Giants drafted tackle Andrew Thomas of Georgia with the fourth pick overall in the recent draft. He probably will replace Solder at left tackle. Veteran Cam Fleming, who was signed as a free agent in the offseason, and Nick Gates, who is entering his third season, probably will complete for the right tackle spot.