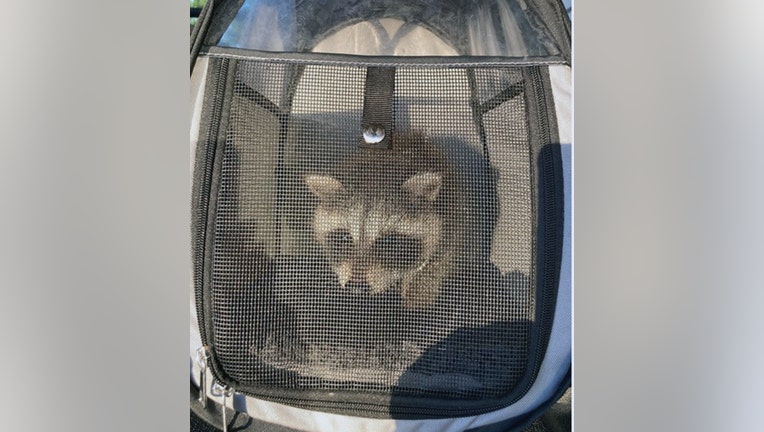 An officer confiscated this raccoon from a man and woman in Attica, N.Y. (New York State Department of Environmental Conservation Photo)

ATTICA, N.Y. - A couple from western New York who took a raccoon to a pet store to shop for food now face hundreds of dollars in fines after a store worker called the authorities.

The Erie County Department of Health urgently contacted a state Department of Environmental Conservation police officer about a potentially rabid raccoon on June 2, DEC said in a news release.

"According to the county, a man and his girlfriend took the animal to a pet store to get food and supplies, and one of the store's employees contacted authorities," DEC said. "Using store surveillance cameras, a store-issued rewards card, and license plate information, [the environmental conservation officer] tracked down the raccoon's owner to Attica… and convinced the subject to turn over the raccoon."

Raccoons are considered dangerous wild animals because they are known to carry and transmit the virus that causes rabies, which can quickly turn deadly.

The officer charged the man and woman with unlawfully possessing a wild animal and slapped each with a $500 fine, the DEC said.

Authorities euthanized the raccoon and tested it for rabies. The test can only be performed on an animal after it has died. The test was negative, the DEC said.

"DEC urges the public to leave wild animals alone. Possessing wild animals is not only unlawful, doing so can be deadly," the department said. "Once a rabies infection is established, there's no effective treatment."