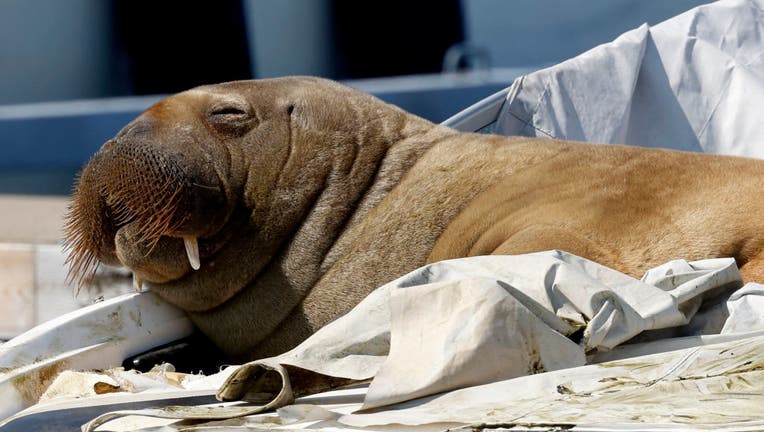 BERLIN (AP) - Authorities in Norway have euthanized a walrus that had drawn crowds of spectators in the Oslo Fjord after concluding that it posed a risk to humans.

The 600-kilogram (1,320-pound) female walrus, known affectionately as Freya, became a popular attraction in Norway in recent weeks, despite warnings from officials that people should refrain from getting close and posing for pictures with the massive marine mammal. Freya liked to clamber on small boats, causing damage to them.

Walruses are protected and as recently as last month officials said they hoped Freya would leave of her own accord and that euthanasia would be a last resort.

Norway’s Directorate of Fisheries said Freya was put down early Sunday "based on an overall assessment of the continued threat to human safety."

"Through on-site observations the past week, it was made clear that the public has disregarded the current recommendation to keep a clear distance to the walrus," it said. "Therefore, the Directorate has concluded, the possibility for potential harm to people was high and animal welfare was not being maintained."

The head of the directorate, Frank Bakke-Jensen, said other options — including moving the animal elsewhere — were considered. But authorities concluded it wasn’t a viable option.

"We have sympathies for the fact that the decision can cause a reaction from the public, but I am firm that this was the right call," Bakke-Jensen said. "We have great regard for animal welfare, but human life and safety must take precedence."

Atlantic walruses normally live in the Arctic. It is unusual but not unheard of for them to travel into the North and Baltic Seas. Another walrus, nicknamed Wally, was seen last year on beaches and even a lifeboat dock in Wales and elsewhere.