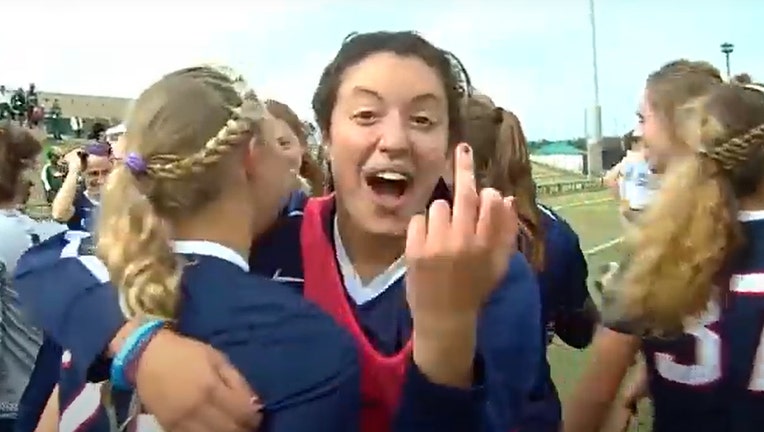 A screen grab from an ESPN broadcast shows Noriana Radwan showing her middle finger to the camera. (ESPN via ACLU)

NEW YORK - A federal appeals court Wednesday reinstated the appeal of a former University of Connecticut women's soccer player who lost her scholarship after she gave the middle finger to a television camera as the Huskies celebrated winning a 2014 conference championship.

A three-judge panel of the 2nd U.S. Circuit Court of Appeals in New York City said Noriana Radwan presented sufficient evidence to go to trial on her claim that she was subjected to harsher punishment than male athletes who violated conduct rules.

The ruling overturns part of a 2020 decision by U.S. District Judge Victor Bolden in Connecticut and sends the case back to the federal trial court. The 2nd Circuit judges, however, upheld Bolden's dismissal of Radwan's First Amendment and due process claims.

Radwan's lawyer and the Connecticut attorney general's office, which represented UConn in the appeal, said they were reviewing the ruling.

Radwan raised her middle finger to an ESPNU camera while celebrating with teammates after the Huskies beat South Florida 3-2 on penalty kicks in the 2014 American Athletic Conference championship game.

Coach Len Tsantiris initially suspended Radwan from the 2014 NCAA Tournament and issued a statement apologizing to the conference, South Florida and those who watched the game on television. Tsantiris retired after the 2017 season.

In her lawsuit, Radwan alleged that after the publicity died down, she was stripped of her scholarship midway through the school year without due process for what the coach described as "serious misconduct." She eventually transferred to Hofstra.

Greg Tarone, her attorney, argued that although Radwan’s offense was regrettable, it was protected speech that did not rise to the level of "serious misconduct." He also argued that the punishment was much harsher than what male athletes at the school had received for more serious offenses, including arrests.