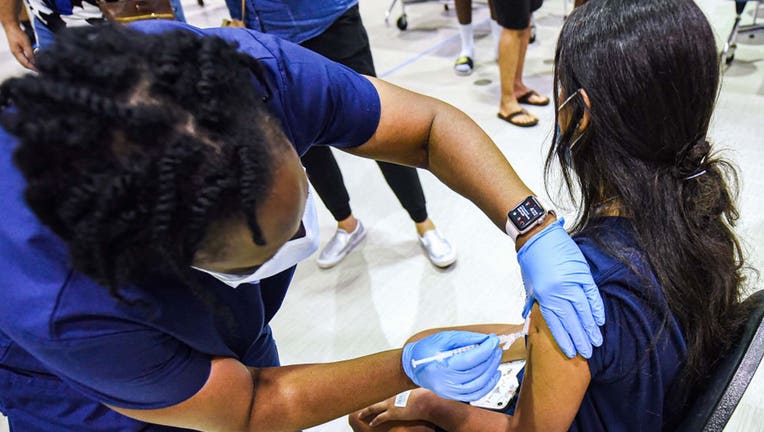 FILE - A nurse gives a girl a dose of the Pfizer vaccine at a COVID-19 vaccine clinic.

TRENTON, N.J. - New Jersey will require health care workers and employees in nursing homes and prisons to get fully vaccinated and boosted against COVID-19, dropping an option to either get the shot or be tested, Gov. Phil Murphy said Wednesday.

Those currently eligible for boosters have until Feb. 28 to get them. Those who will not be eligible until after the window will have until three weeks from their eligibility date, the governor said.

There will be exemptions for workers with special medical circumstances or deeply held religious beliefs, the governor, a Democrat, said.

Could masks make you better-looking?

According to a recent study, masks have been found to increase attractiveness.

Failure to follow the vaccine mandate will subject workers to discipline from their employers, including being fired, Murphy said.

It's unclear how many of the workers affected by the new executive order are not already vaccinated. Murphy's administration already had a mandate in place requiring vaccinations or regular testing.

Murphy indicated he was concerned with vulnerable populations who interact with unvaccinated workers and cited the higher rates of hospitalization of those without vaccinations or boosters.

"We are no longer going to look past those who continue to put their colleagues, and perhaps more importantly I think, those who are their responsibility in danger of COVID. That has to stop," he said.

He also said that New Jersey's test-out option would be coming to an end anyway because of the Biden administration's federal vaccine requirement for most health health care workers, which the U.S. Supreme Court permitted to proceed.

Messages left seeking comment were left with Murphy’s office, as well as hospital and nursing associations.

Republicans recoiled at the order, saying that it could leave health care providers reeling if it leads to an exodus.

"After nearly two years, they’re tired, they’re burnt out, and they’re ready for a break. Instead of giving them extra support, they’re getting another new mandate from Governor Murphy that will further thin their ranks and increase the workload of those who remain," Republican state Sen. Holly Schepisi said.

The federal testing center at Stockton University that Murphy toured Wednesday will be able to administer 1,000 rapid tests a day, seven days a week, Murphy said.