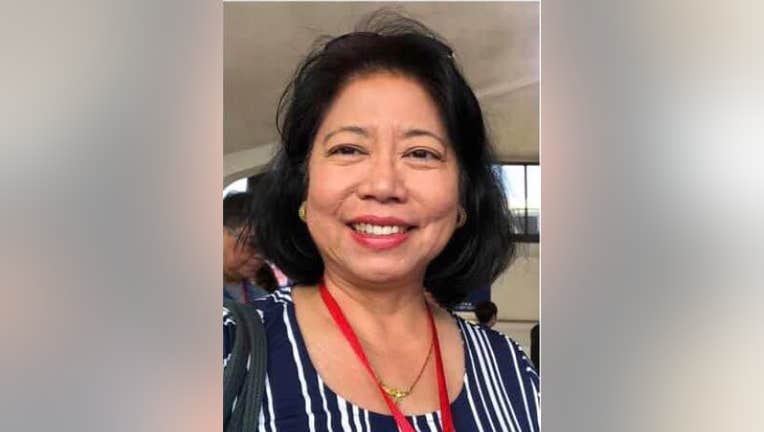 NEW YORK - A nurse from New Jersey has died after a mugger shoved her to the ground during a robbery in Times Square on Friday.

Authorities say Maria Abrocio, 58, of Bayonne was walking on Broadway near West 40th Street when Jermaine Foster, 26, of Irvington, New Jersey, snatched a cellphone away from a 29-year-old woman nearby at around 1:20 p.m.

As Foster attempted to flee the scene, he pushed Ambrocio to the ground, causing her to slam her head against the pavement and suffer severe head trauma.

EMS took Ambrocio to NYC Health and Hospital/Bellevue where she died of her injuries on Saturday.

"I’m asking for all Bayonne people to say a prayer for Maria Ambrocio. Maria, an Oncology nurse at Bayonne Medical Center, was viciously attacked in an unprovoked assault by a deranged man in Times Square yesterday," Mayor Jimmy Davis said Saturday in a Facebook post.

"Today, we mourn the loss of our beloved colleague, friend, and family member," CarePoint Health said in a tweet on Sunday. "Maria's untimely death is a profound loss to us all, especially those whose lives she touched each day at Bayonne Medical Center."

"The incident is the latest in the series of violent acts committed by mentally-ill individuals against members of the Filipino Community in New York City since the start of the year," the Philippine Consulate General in New York said on Facebook. "Beginning January, we have seen several of our kababayan," a term meaning fellow Filipino, countryman or townmate, "most of them senior citizens, violently assaulted by individuals with mental health issues. We have joined calls for authorities to take the necessary steps, including heightened police visibility, to protect the public after we noted the surge in anti-Asian hate incidents that targeted some of our kababayan."

"We reiterate these calls as we mourn our loss but we also ask ourselves: How many more Maria Ambrocios do we have to mourn before the streets would be made safe again?" the consulate added.

Foster was arrested at the scene of the incident, and is currently charged with robbery and assault, but is now awaiting arraignment on murder charges.

The attack is just one of a string of crimes committed in and around Times Square this year, including multiple shootings and a disturbing incident Monday where a woman shoved a subway rider into an oncoming train.

The NYPD has charged a 29-year-old woman with attempted murder for allegedly shoving a woman into the side of a moving subway.

In May, a 4-year-old girl and two other adults were struck by stray bullets in a shooting near Times Square. Then, in June, a U.S. Marine visiting New York City was hit in the back by a stray bullet.