Long lines at the polls

Mayor Bill de Blasio and Gov. Andrew Cuomo said the long lines at the early-voting locations in New York City represent a failure on the part of the Elections Board.

NEW YORK - More people have voted by mail or by in-person voting this year than did in all of 2016. Voters across New York have waited in long lines for hours to cast their ballots since early voting for the presidential election began on Saturday.

In Manhattan, people waited for up to 5 hours to vote at one Upper East Side location on the first day of voting.

The lines continued on the third day of voting on Monday morning in New York City with lines wrapped around Madison Square Garden.

"We need this to be a better experience. Long lines tell people to go home. That’s just the reality," Mayor Bill de Blasio said Monday at his daily briefing.

De Blasio accused the city’s Board of Elections of being “clearly not prepared” for the heavy turnout. He urged the board to expand weekend early voting hours, bring more voting machines online before Election Day, and make more staffers available to help voters.

An email seeking comment was sent to a board spokesperson.

Day 3 of in person voting

Long lines at polling sites in New York was a common sight over the weekend and is anticipated to be the same Monday.

In Syracuse, voters lined up down the block outside a polling site at a community center Sunday morning. Dustin Czarny, Onondaga County elections commissioner, said 8,473 of the county’s 328,052 registered voters had checked in to the polls as of 1:45 p.m. Sunday, surpassing the total votes on the first year of early voting in New York in 2019. 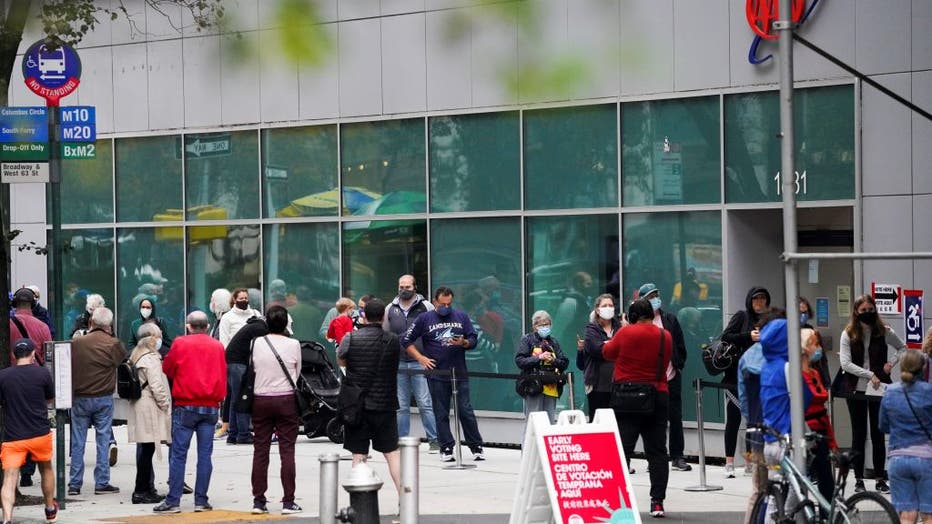 Voters wait to vote during the in-person early voting outside a polling station in New York. (Photo by Wang Ying/Xinhua via Getty)

“Other than seeing some long lines, we did not have any reports of any major issues,” Beth Garvey, special counsel and senior advisor to Cuomo, said at midday Sunday.

Brian Warner, one of the hundreds of masked people who stood in long lines at Albany County’s six polling places on Saturday, took the waiting in stride.