NEW YORK - The number of deaths in New York from the coronavirus outbreak have climbed quickly.

Gov. Andrew Cuomo on Monday said 6,984 new cases have brought the state's total to 66,497. More than 9,500 people have been hospitalized with more than 2,300 people under intensive care.

A Navy hospital ship docked in New York City on Monday as the number of coronavirus-related deaths in the state soared to a "beyond staggering" 1,218.

New York is bracing for an escalation in hospitalizations and deaths in April as the outbreak's projected "apex" closes in. Cuomo noted the statewide death toll has already shot up by 253 in a single day to just over 1,200. 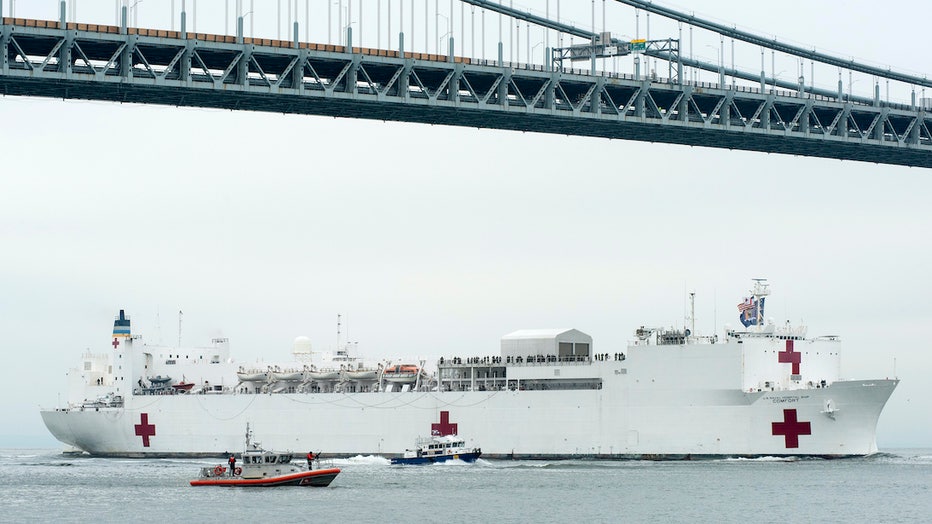 Most of those deaths are in New York City, the epicenter of the U.S. outbreak. And most of the deaths have occurred in just the past few days. Cuomo said the ultimate number of COVID-19-related deaths will be staggering, then added: "To me, we're beyond staggering already."

The massive, white hospital ship pulled into a cruise ship terminal off Manhattan on Monday morning. In addition to the 1,000 beds, the Comfort has 12 operating rooms that could be up and running within 24 hours.

The ship, which was sent to New York City after 9/11 as a respite center for first-responders, is docked just north of a temporary hospital constructed inside the cavernous Jacob K. Javits Convention Center. State and city officials are trying to increase hospital capacity by up to 87,000 beds to handle the outbreak.

"We bring a message to all New Yorkers – now, your Navy is returned and we are with you committed in this fight," said Rear Admiral John Mustin.

There are 9,500 people in New York currently hospitalized for COVID-19, with more than 2,300 in intensive care. In a rare bit of good news, the rapid increase in hospitalizations seems to have slowed down recently, Cuomo said.

The state has more than 66,000 confirmed cases, mostly in New York City.

The USNS Comfort hospital ship arrived in New York and a temporary hospital was set up in Central Park.

De Blasio announced Sunday the deaths of Freda Ocran, a psych educator at Jacobi Hospital in the Bronx, and Theresa Lococo, a pediatric nurse at Kings County Hospital.

Ocran was previously the head nurse of the psych unit at Jacobi and was working, in part, to support her mother in Africa, de Blasio said.

On March 20, Ocran changed her profile picture on Facebook to include a mantra familiar to people on the front lines of the coronavirus fight: "I can't stay home ... I'm a healthcare worker."

Also, the Metropolitan Transportation Authority said five more of its employees had died from the coronavirus. Officials announced the deaths of subway system workers Scott Elijah, Caridad Santiago, and Victor Zapana, and two bus system employees, Ernesto Hernandez and Warren Tucker. The deaths of a subway conductor and a bus operator from the virus had been announced last week.

De Blasio and others criticized Trump for suggesting with no clear evidence that thousands of medical masks are disappearing from New York City hospitals.

At a Sunday briefing, the president told reporters they should be asking, "Where are the masks going? Are they going out the back door?"

Those remarks are "insulting" to hospital workers on the front lines of the city's coronavirus crisis, de Blasio said Monday.

"It's incredibly insensitive to people right now who are giving their all," he said. "I don't know what the president is talking about."

Hospitals had warned staff early on during the outbreak to not take masks home with them, but no evidence has emerged of large-scale looting of supplies.

Kenneth Raske, president of the Greater New York Hospital Association, said in a statement that the workers "deserve better" than the president's comment.

Police in New York City have caught the first bar owner to violate a coronavirus shutdown by running a speakeasy, according to a news report on Monday.

The New York Post said that officers arrested 56-year-old Vasil Pando after they found a dozen people drinking and gambling at a Brooklyn sports bar that was supposed to keep its doors closed during the crisis.

It said Vasil was facing illegal sale of alcohol and other criminal charges. A name for an attorney wasn't listed in court records on Monday.