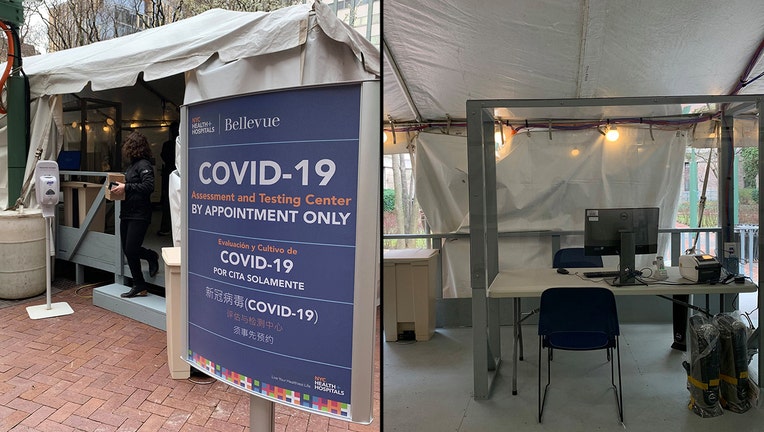 A tent outside Bellevue in Manhattan for COVID-19 testing sample collection. (NYC Health and Hospitals Corp.)

NEW YORK - New York authorities mobilized to head off a potential public health disaster in the nation's largest city Wednesday, with its emergence as the nation's biggest coronavirus hot spot a warning flare — and perhaps a cautionary tale — for the rest of the country.

A makeshift morgue was set up outside Bellevue Hospital, and the city's police, their ranks dwindling as more fall ill, were told to patrol nearly empty streets to enforce social distancing.

Public health officials hunted down beds and medical equipment and put out a call for more doctors and nurses for fear the number of sick will explode in a matter of weeks, overwhelming hospitals as has happened in Italy and Spain. New York University offered to let its medical students graduate early so that they could join the battle.

New York State alone accounted for more than 30,000 cases and close to 300 deaths, most of them in New York City.

Gov. Andrew Cuomo, again pleading for help in dealing with the onslaught, attributed the cluster to the city's role as a gateway to international travelers and the sheer density of its population, with 8.6 million people sharing subways, elevators, apartment buildings and offices.

Some public health experts also attributed the city's burgeoning caseload in part to the state's big push to test people.

Nearly 7 million people in the San Francisco area were all but confined to their homes on March 17, and California put all 40 million of its residents under a near-lockdown three days later.

The order to stay at home in New York State did not go into effect until Sunday evening, March 22, and New York City's 1.1 million-student school system was not closed until March 15, well after other districts had shut down.

Dr. Mark Dworkin, an epidemiology professor at University of Illinois-Chicago, said he hadn't followed New York's situation closely enough to say whether he would have done it differently, but he noted that moving quickly is critical -- and sometimes difficult to do at early points, when the public doesn't sense an imminent threat.

"At first, I think there's a certain amount of disbelief that goes on," he said. "I think that contributes, to some extent, to the lack of putting the foot on the gas pedal on some of the control measures that we know we need to do."

After New York's first positive test came back on March 1 — in a health care worker who had traveled to Iran and secluded herself upon returning — Mayor Bill de Blasio and Cuomo initially cast the disease as a dangerous threat but one that the city's muscular hospital system could handle.

The risk to most New Yorkers, they said, was relatively low.

But their message shifted, as it did with many other leaders, who found themselves acting on new information in an uncharted, fast-changing situation.

Tassier said it wasn't too late: "We can still make things better than they would be otherwise."

In a measure of how the virus is permeating life in ways big and small, the mayor said authorities would remove basketball hoops at 80 public courts where people were not respecting social-distancing instructions not to shoot around with anyone outside their households, while leaving up roughly 1,700 others where there were no problems.