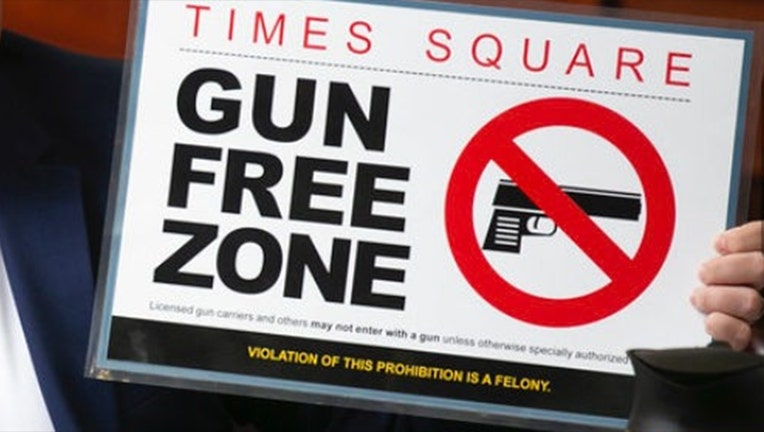 NEW YORK - The 2nd U.S. Circuit Court of Appeals, a federal appeals court in Manhattan, on Wednesday allowed New York to continue enforcing its new gun law as it considers a lower court ruling that would block key provisions.

Last week, U.S. District Judge Glenn Suddaby in Syracuse declared multiple portions of the law unconstitutional and placed a temporary hold on them. The state promptly appealed the order.

The stay from the 2nd Circuit puts Suddaby's order on hold until a three-judge appeals panel can make a decision on the state's motion.

"The interim administrative stay of the district court's temporary restraining order is an important and appropriate step and affirms that the Concealed Carry Improvement Act will remain in effect during the appeals process," Gov. Kathy Hochul said in a statement. "My top priority will always be to keep New Yorkers safe, and we will continue working with the Office of the Attorney General to defend our gun safety laws."

Mayor Eric Adams is insisting Times Square is and will be a gun-free zone. But legal challenges are already underway.

After the U.S. Supreme Court invalidated New York's old system for granting permits to carry handguns outside the home, Hochul and lawmakers rewrote the state's handgun laws this summer. The Supreme Court struck down the state's longstanding requirement that people demonstrate an unusual threat to their safety to qualify for such a license.

Suddaby's ruling put a hold on several of the state's new licensing rules for carrying handguns in public, including one that made applicants turn over information about their social media accounts. The judge also chipped away at the list of "sensitive" locations where people cannot carry guns. He said the state couldn't ban people from carrying guns in New York City's subway system or Times Square.

"I am pleased that the full Concealed Carry Improvement Act will stay in effect and continue to protect communities as the appeals process moves forward," Attorney General Letitia James said in a statement. "My office will continue our efforts to protect the safety of everyday New Yorkers and defend our common-sense gun laws."

The mayor's office released a map of what is being considered the so-called Times Square Gun Free Zone.