NEW YORK - "Gun free zone" signs will be posted at every entry point leading into Times Square starting on Thursday, according to the NYPD.

City Council members held a hearing on Tuesday, looking at legislation that will draw lines to define Times Square, officially labeling certain streets "sensitive areas" prohibiting concealed carry guns. But a majority of the hearing focused on enforcement, with many council members concerned that there hasn't been enough outreach.

"It would have to be much larger for people to really notice it because there are there dozens of signs on each pole coming into and out of Manhattan," Council Member Joann Ariola said. "So it would be easy to miss."

After the U.S. Supreme Court struck down New York's century-old concealed carry law, the state passed numerous bills that will strengthen gun laws, while also creating sensitive areas where guns can still be banned. These include subways, schools, private businesses, and Times Square. The state left it up to the city to define exactly which areas encompass Times Square.

Right now, council members are looking at defining Times Square into two sections. One section will actually include Times Square and will be from Sixth Avenue to Eighth Avenue and from West 40th Street to West 53rd Street. A second adjoining section will go up to the Port Authority Bus Terminal, between Eighth Avenue and Ninth Avenue, from West 40th Street to West 48th Street.

The mayor's office released a map of what is being considered the so-called Times Square Gun Free Zone.

But council members say there has been a noticeable lack of messaging reminding legal gun owners of the changes to New York's gun laws, besides reminders posted to the NYPD and Attorney General's website.

"I haven't heard not one thing, not one sign, and September 1 is literally around the corner," Council Member Rita Joseph said to NYPD representatives testifying at the hearing. "So this should have happened last week."

"Certainly we are trying to push out as much information to our licensees, as I mentioned are our websites being updated," replied Robert Barrows, the executive director of NYPD Legal Operations and Projects.

Over the summer, lawmakers passed a bill in response to the Supreme Court ruling that creates new rules when applying for a concealed carry permit. The new law requires applicants to get 16 hours of hands-on gun training and turn over three years of social media posts to prove they are of "good moral character."

Despite a spike in crime and over 3,000 gun arrests so far this year, the Barrows said the NYPD is prepared for these new changes going into effect on Thursday. Barrows said no new officers will be designated to patrol Times Square, pointing to a dedicated unit already in place.

"I think it's important to just note that this isn't necessarily a huge change for what our officers are doing now," Barrows said. "What this law did and what these rules will do is essentially expand the number of gun-free areas in New York City." 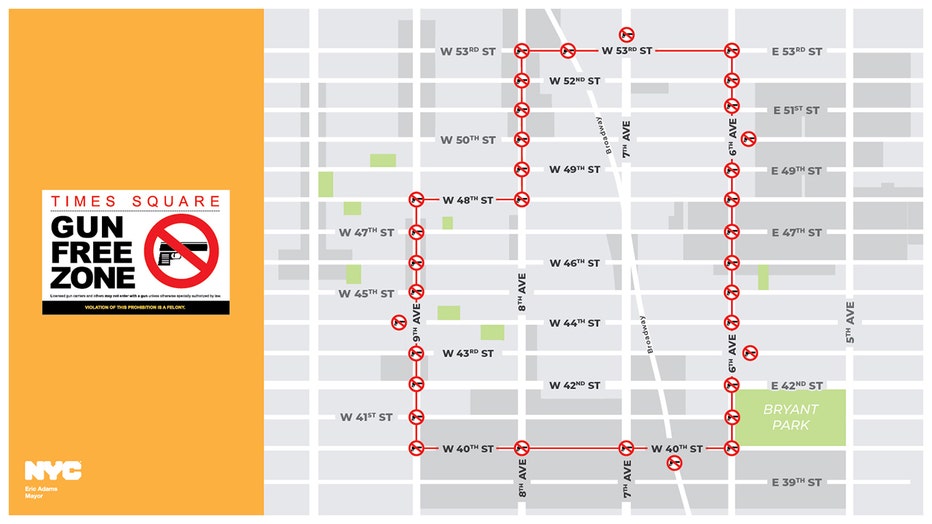 The so-called Gun Free Zone around Times Square. (Courtesy of Office of the Mayor)

The small gun-free signs will be temporary, according to Barrows. The NYPD will eventually have larger and more permanent signs. Police are also working with the Department of Transportation to put up messaging boards in the interim.

People with a concealed carry permit who carry a gun in one of these sensitive areas could be charged with a class E felony.

The U.S. Supreme Court ruled that New York's requirement to show a "special need" in order to get a license to carry a handgun outside the home violated the 14th amendment.