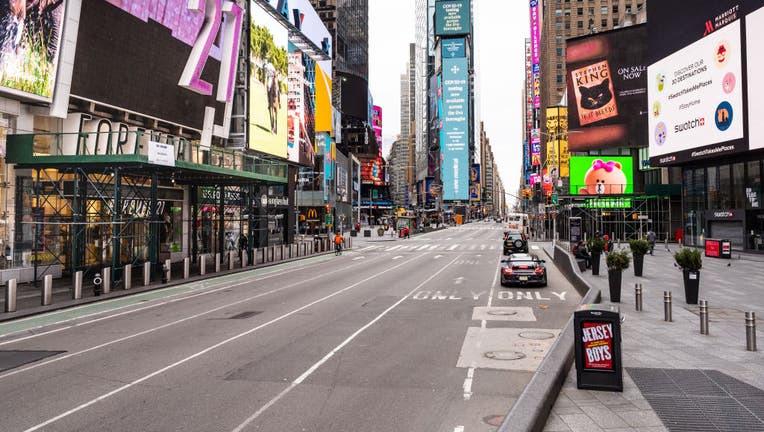 In just one late February day, she lost $5,000 from cancellations by student groups that typically flood the city in the early spring — her most lucrative months.

“I started panicking, and people told me not to,” she said. “Everyone said I was overreacting. Then everything started shutting down.”

Since those early days of the city’s coronavirus outbreak, out-of-towners have become scarce. Times Square, the “Crossroads of the World,” is eerily empty, and a section of Central Park is home to a makeshift field hospital. It all has devastated the tourism economy that aided the city’s recovery from the Sept. 11 terrorist attacks and posted a decade of steady spending growth that topped out at $46 billion last year.

Roughly 300,000 people are employed in the industry, driving double-decker buses, taking tickets at theaters and cleaning hotels — more than the number working in the city’s finance and tech sectors, according to a study by the Center for an Urban Future, an economic think tank.

Now a large share are unemployed and facing months without work, not knowing when the tourists or their jobs will come back. The attractions that draw big crowds are unlikely to open soon, and Mayor Bill de Blasio said last week there won’t be any public events through at least June, dealing a blow to restaurants and retail stores as well.

Marod, who’s also an actress in musical theater and works as a guide at the One World Trade Center observatory, said it’s hard to overestimate the sudden downfall.

“Tourism literally encapsulates everything in the city,” she said. “When you take out tourism, every single profession in the city is going to feel it.”

Close to 400 of the city’s tour guides who responded to a survey said they’ve lost more than $2.5 million already from thousands of cancellations since early March, according to the Guides Association of New York City.

Unable to work, Marod feels fortunate she was able to quickly get unemployment because many tour guides she knows have yet to get a check from the state or a federal stimulus payment.

Still, she’s dropped her voice and dance lessons and stopped ordering from restaurants because of the uncertainty. “It’s a lot of hot dogs and scrambled eggs,” she said.

Like many tour guides, Marod is spending her down time creating virtual tours. Some guides are charging for webinars while others are hoping to build their brand and entice tourists to come back once it’s safe.

Patrick van Rosendaal, a guide who specializes in showing off New York City to people from his home country of Belgium, has been sending postcards to those who were forced to cancel their trips and recording podcasts with past customers.

After seven years, this was shaping up to be his best yet, he said. Now he doesn’t expect much business to come his way until next year, especially from international travelers.

“I’m not even thinking about the summer anymore,” he said. “Lots of people who live paycheck to paycheck are hoping. I am afraid for these people who are counting on starting up in June.”

Friends and former customers have organized an online fundraiser for van Rosnedaal and his family, raising close to $20,000. Some have offered to cover their rent for a few months. “The biggest thing I’ve learned as an entrepreneur is that community is what matters most,” he said.

He imagines that when his tours do resume, it will be special. “The first person I will be guiding around, I will be giving him the tour of my lifetime,” he said.

But the unanswerable question is when that will be.

“It’s a scary prospect,” said Ethan Fuirst, an educator and tour guide at The Tenement Museum in Lower Manhattan. “My greatest fear is that when the museum comes back, it doesn’t come back at full capacity and not everyone can come back at the same time."

He’s been furloughed since mid-March, but the museum already has laid off about a dozen staff members. “As long as unemployment keeps coming in, I feel like I can wait it out,” Fuirst said.

What he thinks about now is whether it’s realistic to keep working at a museum where he’s interacting with visitors all day or whether those visitors will want to be in the same space with strangers from around the world.

“But then I also wonder, ‘Who’s hiring in New York, where else can I go?’” he said. “It feels very much, ‘out of the frying pan and into the fire.’ At this point, I don’t see a world where I can find another job.”

Once the museum does open again, Fuirst expects that its stories will take on new meaning, especially those telling of prejudices that arose against Italian and Jewish immigrants during polio and tuberculosis outbreaks.

“Those will become more relevant as people understand the threat of disease,” he said. “To me, The Tenement Museum is all about what happens when you live way too close to some people and way too far from your family in another country.”

Follow AP news coverage of the coronavirus pandemic at http://apnews.com/VirusOutbreak and https://apnews.com/UnderstandingtheOutbreak.