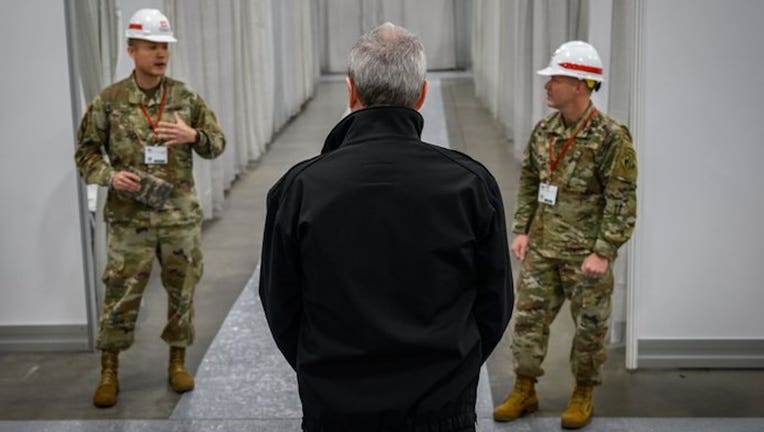 New Jersey Gov. Phil Murphy, center, visits the site of a field medical station being set up at the Federal Medical Station at the Meadowlands Exposition Center in Secaucus, N.J., April 2, 2020. (National Guard)

TRENTON, N.J. - New Jersey is reporting 3,489 new positive cases of the new coronavirus, bringing the state's total to 25,590, and another 182 have died as of Thursday afternoon, according to Gov. Phil Murphy.

"We've now lost a total of 537 precious souls. We keep each of them in our hearts," Murphy said. "I know these numbers are stark. They are shocking and they are indeed sad."

The viral outbreak continues to hit public servants hard. The governor said that Kim King Smith, an EKG technician at University Hospital, and Hudson County correctional officer Bernard Waddell Sr. were among the recent deaths. Murphy said that Smith's family told him that her "smile was more infectious than the virus that took her life."

Murphy said that he and Col. Patrick Callahan of the State Police toured the field hospital being built at the Meadowlands Exposition Center in Bergen County on Thursday morning. The site will open next week with 250 beds, he said. Bergen County, with more than 4,400 cases, is the state's hardest-hit county. Essex, Hudson, Union, and Middlesex counties round out the top-five.

Field hospitals will also be built in Edison and Atlantic City. These three medical stations will take in lower-acuity patients from surrounding hospitals rather than COVID-19 cases, Health Commissioner Judith Persichilli said. But the medical staff there will be prepared to treat anyone who develops COVID-19.

Persichilli said that 35% of the state's newly reported deaths were people who had underlying health conditions. She added that 110 long-term care facilities have reported at least one case and that 17 of the new deaths were associated with those homes.