Nearly 100,000 voters in Brooklyn received an absentee ballot with a mismatched return envelop. The Board of Elections blamed the mistake on the printing company contracts.

The mismatched ballots were sent to 99,477 voters in Brooklyn, FOX 5 NY has learned. A signed ballot return envelope bearing a different name received at the city's Board of Elections could be voided.

With all the uncertainty in the world, Madeleine Fleming of Williamsburg took the steps months ago to get an absentee ballot. Imagine her surprise when she opened her packet to find the name of another voter inside.

"I was shocked. I also got the wrong address. I got someone who lives around the corner," Fleming said. "And then my partner opened his, and he also had the wrong name and address."

New ballots to be mailed

The New York City Board of Elections will arrange for new ballots to be mailed to about 100,000 voters in Brooklyn who received the incorrect return envelopes.

The Board of Elections, which is 0 for 2 in Fleming's household, blamed the problem on the vendor contracted to print and mail the ballots to voters in Brooklyn and Queens.

"We... can assure that the vendor will address this problem in future mailings, and make sure people who received erroneous envelopes receive new ones," Board of Elections executive director Michael J. Ryan said in a statement.

The proper ballots and envelopes would get to voters before the Nov. 3 election, Ryan added.

Rochester-based Phoenix Graphics is being blamed for the massive mistake. The company sent out the correct ballots. But the return envelopes -- also called "oath envelopes" -- have a different voter's name and address on them. If a voter were not to realize it and filled out and returned their ballot, their vote would be voided.

This is all happening at a time when voter confidence is being challenged with unsubstantiated claims from President Donald Trump himself.

Government watchdog groups and the Board of Elections said this snafu isn't fraud but a vendor error.

At a commissioners' meeting on Tuesday, Ryan said, "It is essential that confidence be established in this process."

He announced that Phoenix Graphics would bear 100% of the cost of reprinting and resending the ballots to all those who potentially received mismatched absentee ballots.

"We have the time to fix these human errors and to make sure voters have the correct oath envelope and are able to mail it back or to drop it off at a polling place," Lerner said.

In the meantime, Fleming, the voter in Williamsburg, said she will make sure her vote is counted. She decided she'll go in-person the day early voting starts, which is Oct. 24.

"There's just such a discrediting campaign happening from the Trump administration and so I don't want to fall victim to the misinformation about voter fraud and vote by mail," she said. "I am cautious about making sure my vote is counted. In this instance, because I have the option, I'm going to go in person." 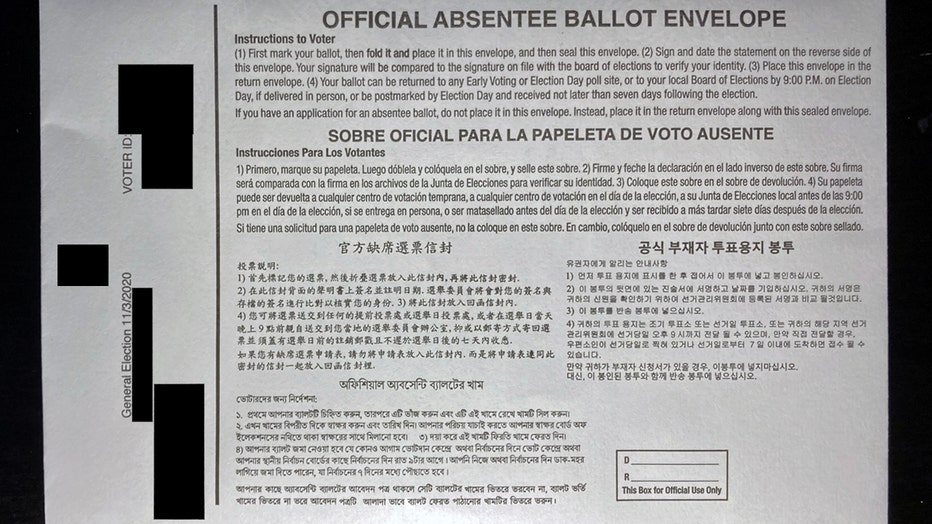 "They have to fix this immediately. If you've received this ballot, call 866-VOTE-NYC and demand the right ballot," de Blasio said.