A NASA spacecraft got closer to Jupiter and its moon than ever before and captured some images.

The National Aeronautics and Space Administration (NASA) held a virtual seminar on how to land a coveted internship with the space agency.

Led by one of NASA’s Jet Propulsion Laboratory's operations engineers, Elio Morillo, the hour-long livestream featured NASA interns past and present, who gave insight into their application process and work with NASA.

Albert Kodua currently works with NASA as a student airborne research intern at the agency’s Armstrong Flight Research Center in California. Kodua collects aerosol data and runs tests to track environmental changes in air particles. But before he was a NASA intern, Kodua had applied five times and was rejected. "Moral of the story is just keep applying no matter what," Kodua said.

RELATED: Bezos offers to cover $2B in NASA costs in exchange for moon mission contract

NASA offers three internship semesters: fall, spring and summer. Morillo encouraged viewers to "go build stuff, go break stuff and learn how to write a story about it and tell interviewers what you learned."

NASA boasts a diverse group of interns. Their projects range from engineering, to graphic design, to public relations. 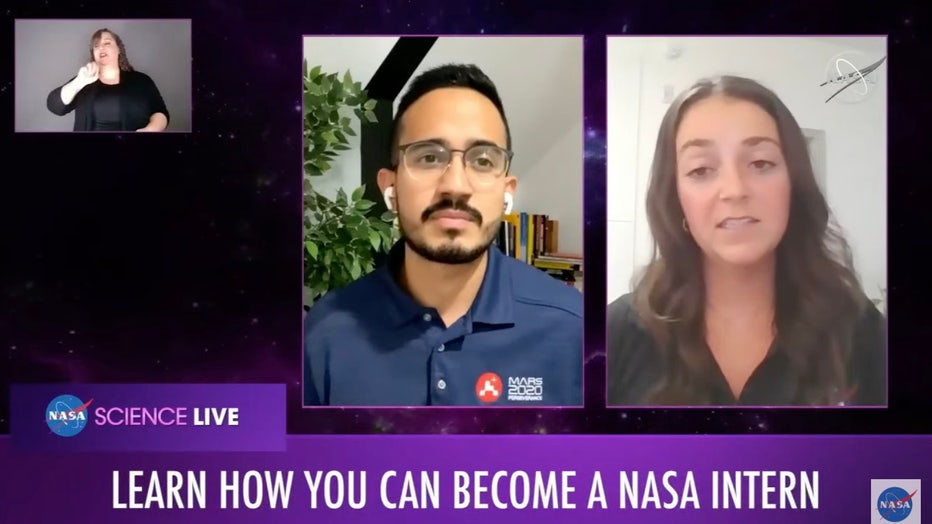 NASA's our-long livestream featured NASA interns past and present, who gave insight into their application process and work with NASA.

Most interns work on STEM (Science, Technology, Engineering and Math) projects, but NASA does hire mission support interns who are interested in education, finance, accounting, communications and public relations.

NASA does not require any previous internship experience, but interviewers want to know what the applicant is interested in and how they apply their interests in their daily lives.

The application requirements include a 3.0 GPA on a 4.0 scale, a mandatory minimum age of 16 years at the time of application, U.S. citizenship and current enrollment in an accredited college, university or high school.

Guiliani said that interns contribute to real NASA missions, work with some of the greatest minds in the world and create new experiences every day. The internship allows students to grow professionally and personality through networking events with professionals and other student interns, Giuliani said.

RELATED: NASA shares audio that represents all of the galaxies in space

Most internships are paid, but pay rates differ based on academic level. Internships are available for many fields and majors — not just science and engineering.

For students under the age of 16, NASA doesn’t offer paid internships, but hosts several academic workshops. One program, called the High School Aerospace Scholars, allows students to explore the world of STEM with science and engineering projects.

This story was reported from Boston.