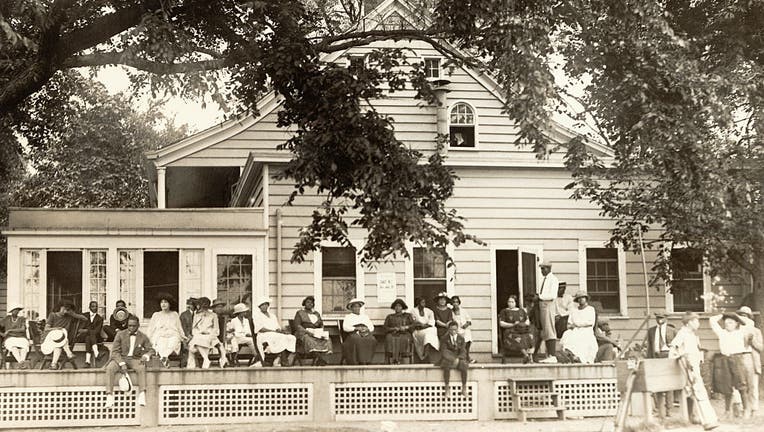 (Original Caption) One year old, and possessed of some 200 members and doing nicely, was the world's only Negro Country Club, the "Shady Rest," in Westfield, New Jersey, as shown in this photograph. (Photo by George Rinhart/Corbis via Getty Images)

SCOTCH PLAINS, N.J. (AP) — It was once the center of African-American society in New Jersey, an institution that became home to an emerging middle class enjoying the amenities of country club life in Scotch Plains Township.

A year after it opened in 1921, there were 200 members at the Shady Rest Golf and Country Club, which is considered to be the first African-American owned and operated country club in the United States.

“It was the place to be," said Sylvia Hicks, chair of the Preserve Shady Rest Committee. “There was no place for a black man or woman to go to play golf or play tennis."

Since its inception in 2013, Hicks said the committee’s goal is to resurrect a forgotten history and get Shady Rest listed on the National Register of Historic Places.

As it grew in popularity, operating from 1921 to 1964, African-Americans came by car and train, traveling from nearby communities like Newark and Montclair, Summit and Elizabeth. They made their way from Harlem, New York, areas in New England and Pennsylvania, and as far south as North and South Carolina.

Here they socialized during an era of segregation that barred African-Americans from white country clubs. At Shady Rest, they gathered for high level tennis and there were golf tournaments organized by the United States Colored Golf Association.

In the evenings, dances featured famous entertainers, their bands and notable luminaries. It was practically a who’s who among jazz and blues legends.

On the golf front, the historical significance of Shady Rest is linked to John M. Shippen Jr. He was the first American-born golfer and the first African-American to compete at the U.S Open at Shinnecock Hills on Long Island in 1896.

He was 18, but Shippen competed in four more U.S. Open tournaments from 1899 to 1913. After working at East Coast golf clubs, Shippen made Shady Rest his home in 1931.

He lived there for more than 30 years, serving as the club’s golf professional and greenskeeper until he retired in 1964. Four years later, Shippen, 89, died May 15, 1968 in a Newark nursing home with little recognition.

He had no headstone until Thurman P. Simmons, chairman of the John Shippen Memorial Golf Foundation, raised the money to erect one at Rosedale Cemetery in Linden. For the past 33 years, Thurman has kept Shippen’s legacy alive.

“We’ve got to preserve our history," Simmons said. “I’ve got Shippen covered."

The Shady Rest Committee, a group of residents and local supporters, continues to honor the golf legend along with the club history. Hicks said that effort began under former Mayor Kevin Glover, who learned about Shady Rest and Shippen from Mauro Checcio, another former mayor, who introduced him to Simmons.

The town’s gem, unfortunately, had deteriorated and needed repair. There were talks, Hicks said, about demolishing the structure but Glover stepped in to save it, allocating funding for renovations.

“Every time I drive by there, I knew we had done something right," Glover said. “This was a living, breathing facility."

Mayor Al Smith has taken over and Hicks gives him credit moving forward with preserving the history.

“I’m proud of everything we’ve done to keep it as historical as possible,” Smith said. “Hopefully someday people will understand the importance of what we have here in Scotch Plains."

Shady Rest is a mixture of the past and present. The dining room is still there, but a new room is filled with Shippen’s history.

Pictures of celebrities and country club life are on walls adjacent to remnants of when the building was the Ephraim Tucker Farmhouse in the 1700s. There’s original wood, thick beams and portions of the eaves under the roof.

The Tucker property, located outside of Westfield, later became the George Osborne Tavern in 1882. During the next decade, the Westfield Country Club bought the tavern, turning the farmland into a nine-hole golf course and the farmhouse into a clubhouse in 1900.

It was in the middle of an African-American community. Families lived on both sides of the golf club, and they often walked across a section of the golf course to visit relatives and friends.

The well-used path, Hicks said, became a legal right of way, and that factored into the Westfield Club’s decision to not expand its course to 18 holes.

Instead of a potential legal battle, Hicks said the Westfield Club sold the property to the Progressive Realty Corporation, a group of African-American investors who changed the name to Shady Rest in 1921.

Over the next 40 years, the country club operated just like one. A committee did background checks to see if potential members were socially acceptable. If not, they received a denial letter.

By many accounts, everyone wanted to be at Shady Rest. James Baker, the club director, told a New York Sun reporter on assignment that 2,500 people had been there July 4th. A week later, the reporter described his visit.

“In faultless white flannels and impeccable knickers they sit on the veranda consuming lemonade and ice cream and discuss the important social events of the day."

They flocked here during its heyday, their names, professional statuses and cars listed in a 1926 edition of The Pittsburgh Courier. From Washington, D.C. to New York, they pulled up to a two-day golf tournament in a Stutz Roadster, Packard limousine, Willys-Knight Sedan and a Cadillac.

But in 1938, the club ran into financial problems and was acquired by the township, which allowed Shady Rest to continue as a private club until 1964. Scotch Plains took over operations and renamed the grounds the Scotch Hills Golf Club and opened it to the public.

The main part of the old Shady Rest building is still there with a sign out front. Hicks, however, is looking to the public for more memorabilia so no one forgets the Shady Rest story of how African-Americans carved out a social center of community life for themselves.

“They made a way out of no way," Hicks said.