Bowling centers in New York opened on Monday under some new guidelines, including limiting the number of bowlers to half-capacity. David Limekiller, the owner of Homefield Bowl in Yonkers, said the last few months have been very hard. He said he blew through his savings just to keep the business afloat while it had to remain shut down.

ALBANY, N.Y. (AP) - New York City museums and aquariums, as well as bowling alleys across the state, are getting the green light to open again, while the state will soon release guidance for indoor gyms to reopen on Monday, August 17.

The Metropolitan Museum of Art plans to open its doors Aug. 29, pending city and state approval, while the Museum of Jewish Heritage has announced it will reopen in September.

And bowling alleys can reopen statewide starting Monday, as long as they stick to a 50% occupancy limit and establish disinfection protocols for shared and rented equipment. The governor said bowling alley staff must close every other lane and bring food and alcohol to customers.

Gov. Andrew Cuomo announced that bowling centers may reopen at 50% capacity. Frank Wilkinson, the owner of Rab's Country Lanes, said he and his staff will make it work in the short run. But he said his center has been closed since March 16 and he has tens of thousands of dollars in expenses every month.

“So you’re at a lane, you’re bowling, you can order food, alcohol, they come to you,” Cuomo said.

But owners of bowling alleys and gym, fitness studios, and movie theaters had held a press conference Thursday calling on New York to release health and safety guidance for their industries. 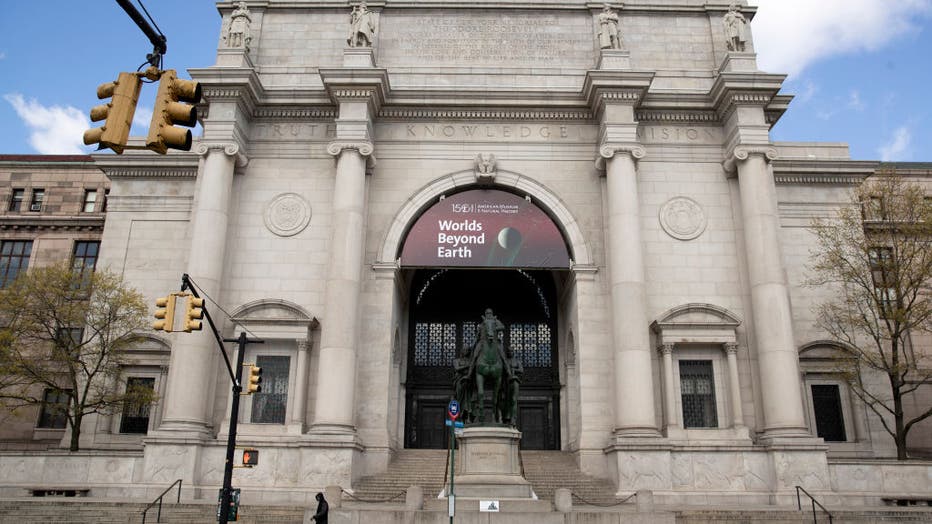 An exterior view of the Natural History Museum as New York City continues to idle during the coronavirus shutdown on April 22, 2020 in New York City. (Photo by Bennett Raglin/Getty Images)

“Since the start of Phase 4, these businesses have been totally left behind, and I am hearing from countless constituents who are at a loss as the state has gone radio silent, refusing to answer questions or provide even a timeline for when they can expect to receive guidelines that would allow them to plan for a safe reopening," state Sen. Sue Serino, a Republican, said in a statement Thursday.

Cuomo also announced he's sending mobile testing sites to rural farms ahead of the fall harvest in light of “several clusters” at farms.

Gov. Cuomo expected to deliver guidance for gyms to reopen in NY

Several farmworkers are calling on lawmakers and Cuomo to pass stronger workplace protections in light of the coronavirus, and the New York Farm Bureau said it asked the state for increased testing in April.

The governor praised New York's progress in keeping rates of infection and hospitalization low this summer.

The pandemic hit New York this spring, and hospitals saw a peak of over 18,000 patients and over 700 deaths a day in early April.

Cuomo said hospitals reported more than 550 COVID-19 patients as of Thursday, down from about 800 a month earlier. Hospitals and nursing homes have reported 40 deaths of people who tested positive for COVID-19 over the past week.

The governor touted the percentage of individuals testing positive for COVID-19 in New York each day, which has dipped below 1% this week as the state has boosted testing.

Still, an average of 74 new COVID-19 patients are entering hospitals each day over the past week, up from 67 in the week ending July 8.

And 670 New Yorkers have been testing positive for COVID-19 every day on average since mid-June, when the number of daily positive tests began to plateau.

New York is continuing to see an average of three new COVID-19 cases per 100,000 residents — a figure that hasn't changed since mid-June, according to The Associated Press's analysis of state COVID-19 data.

But New York's rate of new cases adjusted for population is much lower than most states — Florida, Georgia and California have each seen about 30 new cases per 100,000 residents over the past week.