LOS ANGELES - Multiple official social media accounts belonging to the NFL and its teams were hacked on Monday.

Social accounts for different teams were compromised as well, including the Buffalo Bills' Facebook account and the official Twitter pages for the Arizona Cardinals, Cleveland Browns, Dallas Cowboys, and Green Bay Packers. A Twitter representative stated that the accounts were locked and that the social media platform is currently investigating the issue. 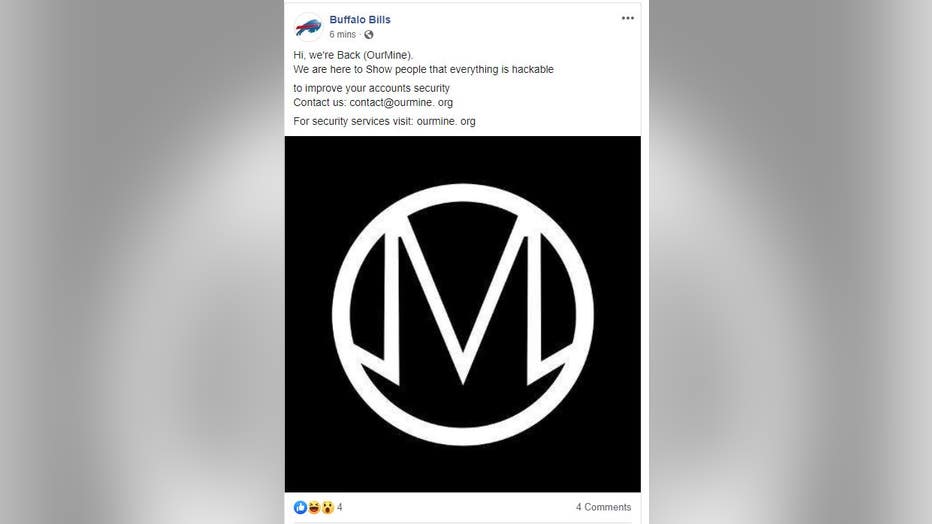 OurMine, the group claiming responsibility for the hacks, was behind cyber attacks on organizations such as Vevo and Wikileaks, as well as notable tech figures like Facebook's Mark Zuckerberg and Sundar Pichai, CEO of Alphabet, Google's parent company.

"We are not blackhat hackers, we are just a security group...we are just trying to tell people that nobody is safe," an anonymous individual claiming to be a member of OurMine said in a 2016 interview with WIRED.

In a statement, the NFL confirmed the hack and said its cybersecurity department found "targeted breaches and failed attempts" across the league and team social media accounts.

"The NFL took immediate action and directed the teams to secure their social media accounts and prevent further unauthorized access," the statement reads. "Simultaneously, the league alerted the social media platform providers and, with their assistance, secured all league and club accounts. We continue to work diligently with the teams, which have resumed normal operations. The NFL and teams are cooperating with its social media platform providers and law enforcement."