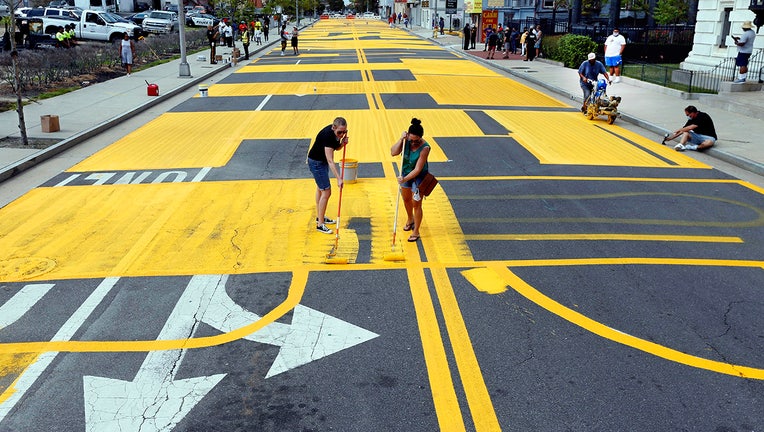 NEW JERSEY - Atlantic City says it will redo a Black Lives Matter tribute on a street because the original painting of those words across the entire road confused motorists who didn't know where to drive on it.

Instead, the words "Black Lives Matter" will be painted onto the repaved road in a manner that does not obscure lane divider markings, Mayor Marty Small said Thursday.

The City Council voted Wednesday night to spend $36,000 to repave the road, which police said had become so confusing to motorists that the city blocked it off at either end with barriers to prevent anyone from driving on it.

"It was an oversight on our part, and when we realized it, we fixed it," Mayor Marty Small said. "The words "Black Lives Matter" will still be on the street."

The road needs to be repaved because the type of paint used in the display cannot be painted over, officials said.

Last September, the city held an event in which volunteers donated paint, materials and labor to write "Black Lives Matter" in huge capital letters stretching from curb to curb on a section of Martin Luther King Jr. Boulevard in the city's downtown.

But the giant yellow letters obscured the yellow dividing line of the four-lane roadway, as well as the broken white lines on either side marking travel lanes.

Acting Police Chief James Sarkos told the council Wednesday night that the mural violated state Department of Transportation regulations. He also said motorists had become confused while driving on it, to the point that police had to close the road to traffic to prevent accidents.

The road painting was a compromise that averted a potential confrontation between activists who wanted to paint the words "Black Lives Matter" on the famous Boardwalk, and city officials who would not allow it.

City Council member LaToya Dunston accused the city of wasting taxpayer dollars by painting the road without knowing the rules governing it.