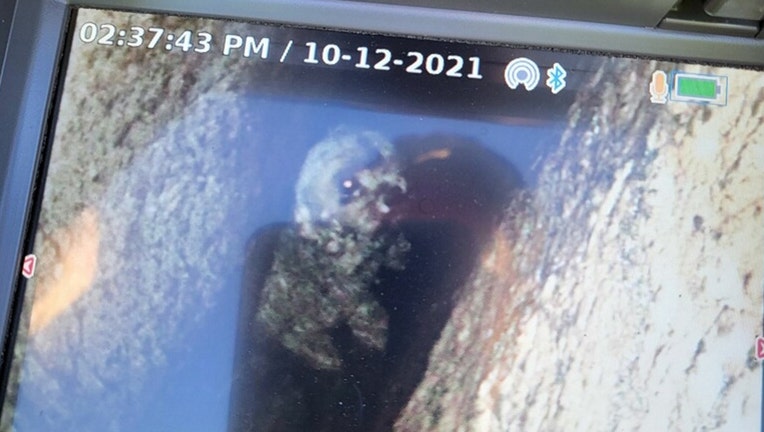 KERHONKSON, N.Y. - Daring specialists from a cave rescue team saved a dog that was trapped for five days deep inside a narrow, rocky crevice at a state park in Ulster County.

The 12-year-old dog, named Liza, went days without food or water at Minnewaska State Park Preserve but apparently survived by licking the damp walls of the crevice it had fallen into, according to parks officials.

On Thursday, on Oct. 7, a woman was hiking with the dog in the area of the park known as Gertrude's Nose when the dog fell out of sight and into a crevice, officials said.

Over the next few days, park staffers tried to get to the barking dog but couldn't. 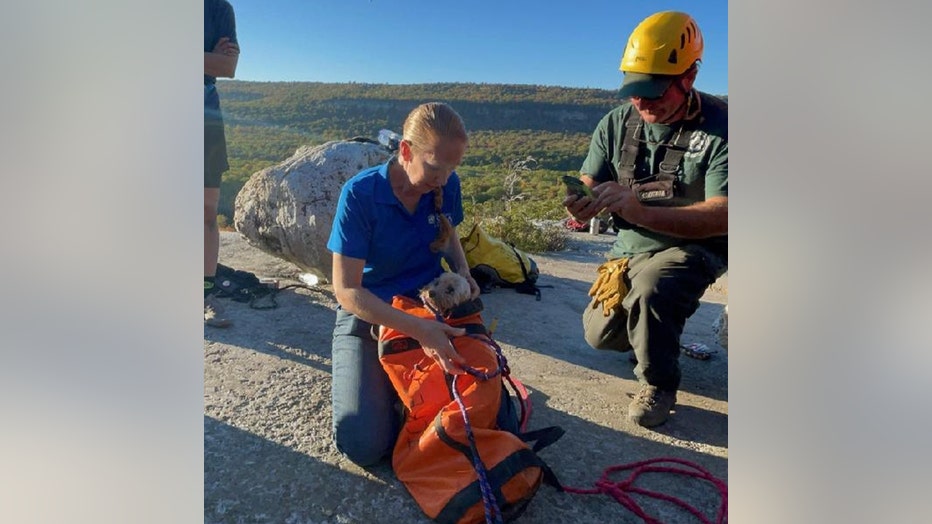 On Tuesday, staffers from the Ulster County SPCA and the New Jersey Initial Response Team, a regional volunteer group specializing in cave rescue, arrived at Minnewaska to help. They were able to get a plumbing camera down into the crevice to confirm that Liza was still alive.

"This was a tight vertical fissure leading to an even tighter horizontal crack," Mark Dickey, chief of the NJIRT, said in the news release. "Only Jessica Van Ord, our smallest team member, was able to squeeze and contort herself more than 40 feet from the surface to reach the dog."

Van Ord patiently inched her way into the crevice and used a hot dog hanging from the end of a catch pole to lure Liza into putting her head into the loop. Then rescuer Kevin Mulligan tightened the loop so that the team could lift the dog to safety. 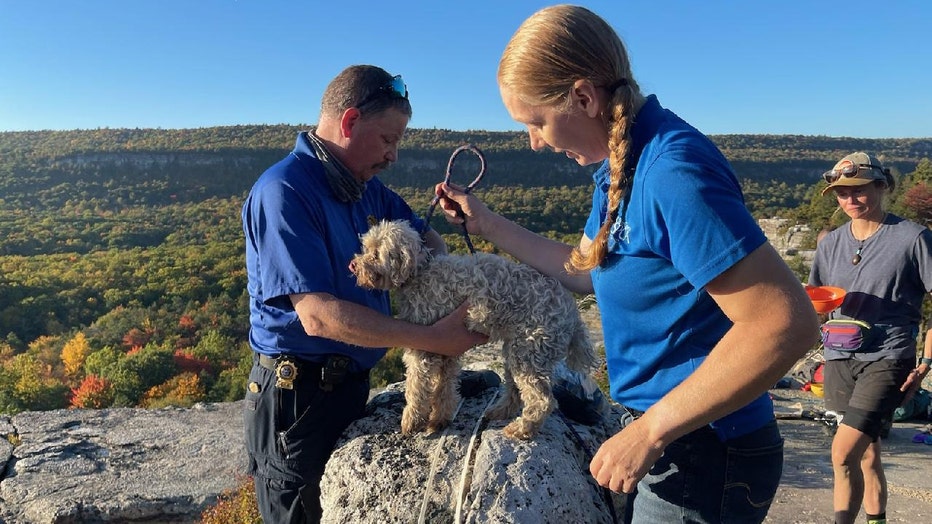 "Finally lassoing the dog, we pulled her up and I breathed a sigh of relief as I grabbed her furry little body. 'I got the dog!' I yelled, and heard cheers above. I still had to maneuver through the passage with the dog, and we had to be careful not to lose her," Van Ord wrote. "She remained amazingly calm. I passed her off to Kevin, gathered all the equipment, and eventually made it back through the squeeze. The last part was still tricky, as we worked together to fit the dog into a bag and tied a tag line to the bag so that we could help guide it through the tight spot above. She was hauled up and the joy on the surface was palpable. After sending the gear up, Kevin and I climbed out of the cave."

Ulster County SPCA Executive Director Gina Carbonari said everyone was worried that they were too late to save Liza but rejoiced when Van Ord reported that the dog was still moving.

"It's always heartwarming to not only have such a positive outcome in cases like this, but also to see so many people come together, putting themselves at risk, to save an animal's life," Carbonari said. "Every person there played a role in making this happen — an amazing team effort by multiple agencies." 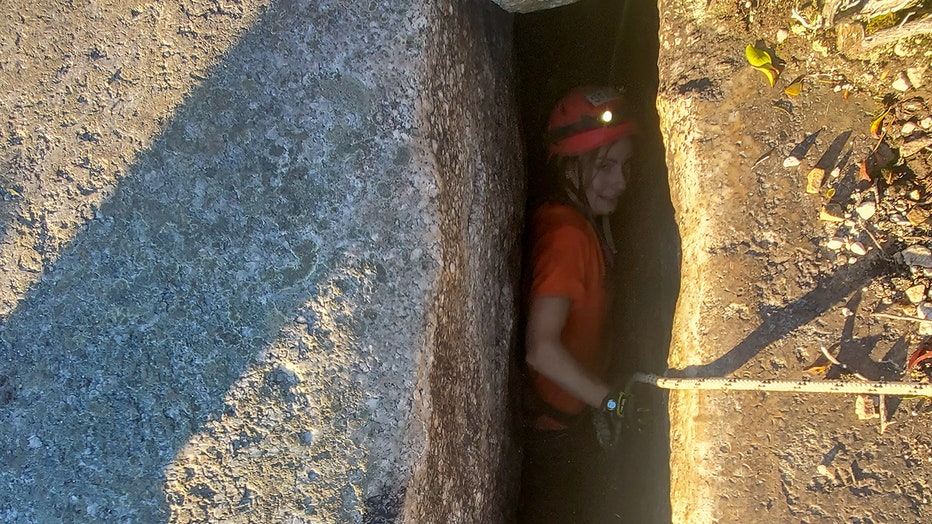 What happened is a reminder that a misstep by anyone — an adult, a child, or a pet — near caves and cliffs can be deadly, NJIRT's Dickey said in the news release.

Officials are reminding visitors that park rules require dogs to be kept on a leash at all times for their safety as well as the safety of other park-goers. The leash cannot be longer than six feet, by the way.

Minnewaska State Park Preserve and the adjacent Mohonk Preserve, located in the Shawangunk Ridge just minutes from New Paltz, are known for the winding hiking trails, miles of crushed-stone carriage roads, and especially the solid quartz cliffs that attract technical rock climbers from all over the country.

This story was produced in New York City with The Associated Press. 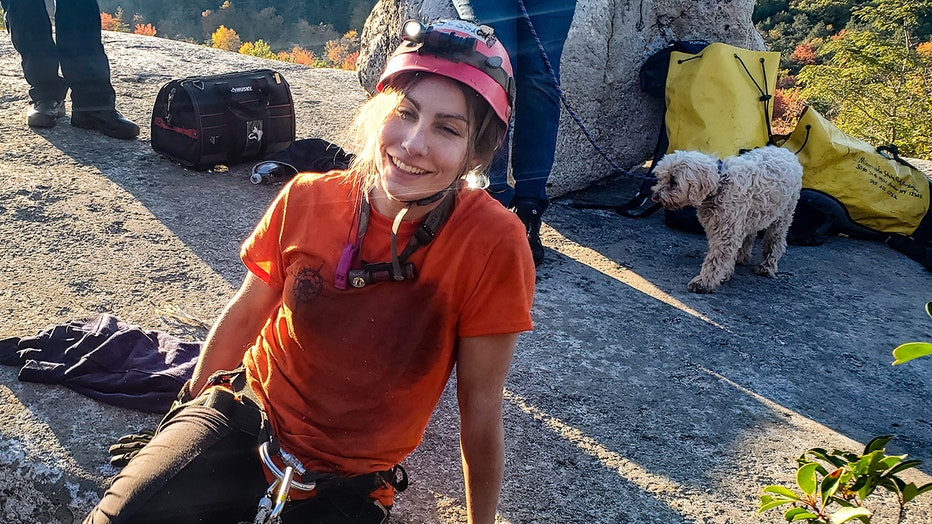