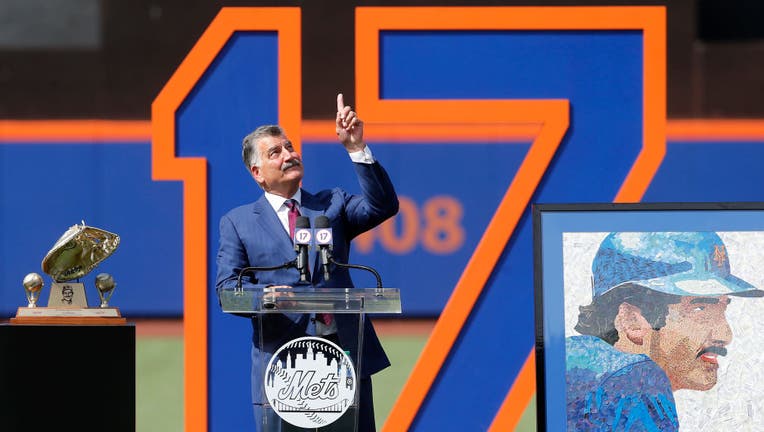 Former New York Met Keith Hernandez speaks during his jersey retirement ceremony prior to a game against the Miami Marlins at Citi Field on July 09, 2022 in New York City. (Photo by Jim McIsaac/Getty Images)

NEW YORK - About an hour before addressing the packed house at Citi Field, a concentrated Keith Hernandez stared in deep study at his index cards in a mostly empty interview room — his big brother sitting just a step away.

Always prepared. Always a pro. Always with Gary by his side.

A rock-steady leader for the New York Mets' last championship team, Hernandez received a rare honor Saturday when the club retired his No. 17 jersey before a game against the Miami Marlins.

"This is just a great moment for me. I never dreamed I'd be here this long, in the organization," Hernandez said from a podium between the pitcher's mound and second base. "I am absolutely humbled and proud that my number will be up in the rafters for eternity."

Moments later, No. 17 in blue with orange trim was unveiled along the Citi Field roof in the left-field corner, just to the left of the No. 36 retired for pitcher Jerry Koosman last year.

Hall of Famers Tom Seaver (41) and Mike Piazza (31) are the only other Mets players to have their numbers retired by the team. Former managers Casey Stengel (37) and Gil Hodges (14) were also so honored.

"I thank you," the 68-year-old Hernandez, now a popular Mets broadcaster, said to the cheering and chanting sellout crowd of 43,336 during a 30-minute ceremony. "I'm truly overwhelmed."

Beloved by Mets fans for his work both on the field and in the booth, Hernandez spent seven of his 17 major league seasons with New York from 1983-89 and batted third for the 1986 World Series champions.

The next year, he was chosen the first captain in club history.

Hernandez ranks second in Mets annals with a .297 batting average and 10th in RBIs. He won a team-record six of his 11 Gold Gloves at first base in New York and was elected to the Mets' Hall of Fame in 1997.

"He practically rewrote the manual on how to play first base," longtime Mets radio announcer Howie Rose said. "He didn't simply play first base, he performed it — a virtuoso."

Following the ceremony, Hernandez threw out the first ball from first base to his brother Gary, who caught it with a weathered first baseman's mitt Hernandez wore during the second half of the '86 season.

Hours before the game, fans in No. 17 jerseys with Hernandez's name across the back stood in long lines waiting for the gates to open.

Wearing a blue suit, Hernandez said he'd been awake since 3:40 a.m. after getting a text from someone in a a different time zone. Nervous about his speech, he couldn't fall back asleep and started writing it about 8:30 a.m.

"Hopefully I'll get through it in five minutes, if I don't break down," Hernandez said.

He choked back tears as he mentioned his family and the glowing comments he'd read from former teammates about him in feature stories leading up to his big day.

Thanks to his personal broadcast style and entertaining appearances on "Seinfeld" and elsewhere, many Mets fans feel a unique kinship to Hernandez. He tells home-improvement stories, shares cuddly pictures of his cat, Haji, and expounds on his lengthy, traffic-filled rides on the Long Island Expressway to and from his Sag Harbor home.

A recorded message of congratulations from Jerry Seinfeld even played on the large video board in center field in the middle of the first inning.

Hernandez also credits some of his clutch hitting in a Mets uniform to advice from revered brother Gary, who pumped his left arm in the air emphatically while receiving a huge ovation from the crowd as he was introduced with about a dozen members of Hernandez's family, including three daughters and two grandchildren.

"He was always my good-luck charm," Keith Hernandez said.

Hernandez has broadcast Mets games since 1999 and won three Emmys for Best Sports Analyst. The bobbleheads handed out Saturday at Citi Field featured Hernandez, with his familiar salt-and-pepper mustache, at the broadcast desk holding a microphone.

"Keith connected with Mets fans in a way that few others ever have," Rose said.

Hernandez was presented with a gift by owner Steve Cohen and manager Buck Showalter — a large mosaic portrait made out of 6,000 Keith Hernandez baseball cards and Strat-O-Matic game cards of 1986 Mets players.

Piazza was on hand for the ceremony along with a few of Hernandez's former Mets teammates, including Mookie Wilson, Tim Teufel, Ed Lynch and Ron Darling — now a TV broadcast partner as well.

Hernandez also won a World Series title with the 1982 St. Louis Cardinals and was inducted into their Hall of Fame last year. He was acquired by the Mets in a pivotal June 1983 trade, charged with leading the turnaround of a team that had been a laughingstock for years and teaching its rising young talent how to win.

Groomed for such a role in St. Louis by Hall of Famer Lou Brock, that's exactly what Hernandez did — in Queens instead.

"I'm just kind of a fiery player," said Hernandez, who was unhappy about the trade at first.

"What did I know? A life and career-changing event."