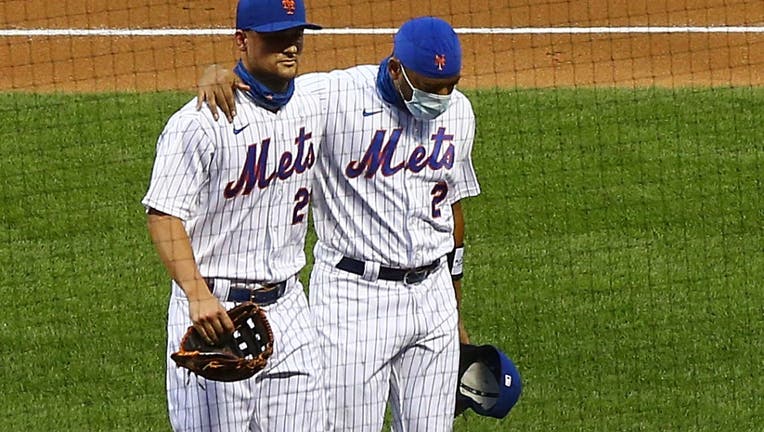 Dominic Smith #2 and J.D. Davis #28 of the New York Mets walk off the field prior to the start of the game against the Miami Marlins at Citi Field on August 27, 2020 in New York City. (Photo by Mike Stobe/Getty Images)

NEW YORK (AP) - The New York Mets and Miami Marlins jointly walked off the field after a moment of silence, draping a Black Lives Matter T-shirt across home plate as they chose not to play Thursday night.

After other games around baseball were postponed to protest social injustice, the Mets were late to take the field Thursday and neither starting pitcher threw any warmup pitches. The teams stood around their dugouts in full uniforms shortly before the 7:10 p.m. scheduled first pitch, and the national anthem was played and all players and coaches stood.

Mets outfielder Dominic Smith — a Black man who wept Wednesday night while discussing the shooting by police of a Black man in Wisconsin over the weekend — then led New York onto the field. Players took their positions, then reserves and coaches filed out of both dugouts and stood silently for 42 seconds.

Both teams then returned to their clubhouses, leaving only the black T-shirt at home.

“After seeing the comments Dom made last night, it’s not just about Dom, but it really touched all of us in the clubhouse,” Mets outfielder Michael Conforto said.

Mets general manager Brodie Van Wagenen said Thursday in a video that leaked to the league's official website that his players did not want to play and they were waiting to hear from the Marlins about coordinating a postponement.

“That’s Rob’s instinct,” Van Wagenen said in a conversation he didn’t appear to know was being streamed on MLB.com. “At a leadership level, he doesn’t get it. He just doesn’t get it.”

Van Wagenen said in the video — after specifying the conversation “can't leave this room” — that Manfred wanted the Mets and Marlins to walk off the field together shortly before the scheduled 7:10 p.m. first pitch, then come back and play at 8:10 p.m.

Van Wagenen apologized for his comments later Thursday, saying the idea to walk out and return was actually hatched by Mets Chief Operating Officer Jeff Wilpon.

“Jeff Wilpon called Commissioner Manfred this afternoon to notify him that our players voted not to play," Van Wagenen said. "They discussed the challenges of rescheduling the game. Jeff proposed an idea of playing the game an hour late. I misunderstood that this was the Commissioner’s idea. In actuality, this was Jeff’s suggestion.

"The players had already made their decision so I felt the suggestion was not helpful. My frustration with the Commissioner was wrong and unfounded. I apologize to the Commissioner for my disrespectful comments and poor judgement in inaccurately describing the contents of his private conversation with Jeff Wilpon.”

Manfred said in a statement that he has not tried to override players' wishes to protest by not playing.

“Over the past two days, players on a number of Clubs have decided not to play games," he said. "I have said both publicly and privately that I respect those decisions and support the need to address social injustice. I have not attempted in any way to prevent players from expressing themselves by not playing, nor have I suggested any alternative form of protest to any Club personnel or any player. Any suggestion to the contrary is wrong.”