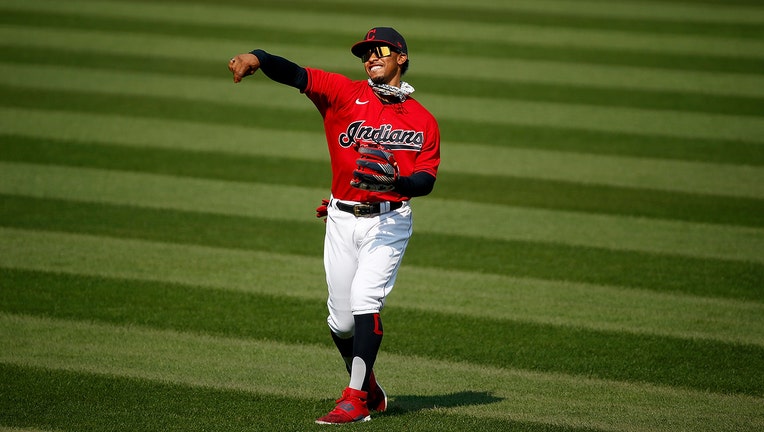 Francisco Lindor of the Cleveland Indians warms up prior to the start of the game against the Pittsburgh Pirates at Progressive Field on September 27, 2020 in Cleveland, Ohio. (Photo by Kirk Irwin/Getty Images)

Hedge fund owner Steven Cohen bought the Mets on Nov. 6 from the Wilpon and Katz families and pledges to increase spending.

The 27-year-old Lindor is one of baseball's best all-around players, capable of winning games with his bat, glove or legs. He's a career .285 hitter and averaged 29 homers, 86 RBIs and 21 steals in his six major league seasons — all in Cleveland.

He has also been the face of the Indians' franchise, with an infectious smile and joy for playing that has made him one of Cleveland's most popular athletes.

Carrasco is one of the game's best comeback stories, overcoming leukemia to become one of the AL's steadiest starters. The 33-year-old has a 88-73 career record with a 3.73 ERA.

Once the Indians’ pandemic-shortened 2020 season ended with a loss to the New York Yankees in the wild-card round, it became a matter of when, and not if, Lindor would be traded.

Cleveland had run out of options. Lindor has turned down numerous long-term contract offers from the cash-strapped Indians, betting on himself and knowing he could get more money from a major-market team when he becomes a free agent.

He is only under contract through the 2021 season, so the Mets will have to quickly get to work on locking him up long-term.

The Indians made it known that Lindor was available for the right price. And while it’s never easy to trade a generational talent with perhaps his best years still ahead of him, Cleveland’s financial situation was never going to make it possible to keep him.

Cohen is hoping to turn around a franchise that has not won a World Series since 1986.