A new Siena Collage poll says 76% of New York City residents are concerned they could become victims of violent crimes.

NEW YORK - Mayor Eric Adams remains confident he can reduce crime. "We are going to turn around this city in crime — I know that," he said.

A new poll shows many New Yorkers feel differently. A Spectrum News NY1/Siena College poll shows 70% of those surveyed feel less safe than before the coronavirus pandemic. And 76% of residents interviewed also fear they could be a victim of violent crime.

New Yorkers that FOX 5 NY spoke to put it this way.

"People are robbing. People are killing people. People are doing a lot of things," one woman told us. "I don't feel safe as we used to."

"I don't feel as safe as I did before COVID-19, especially in the subway, there's a lot more homeless, not as many cops as there should be," another said. "The mayor's office needs to do something about it." 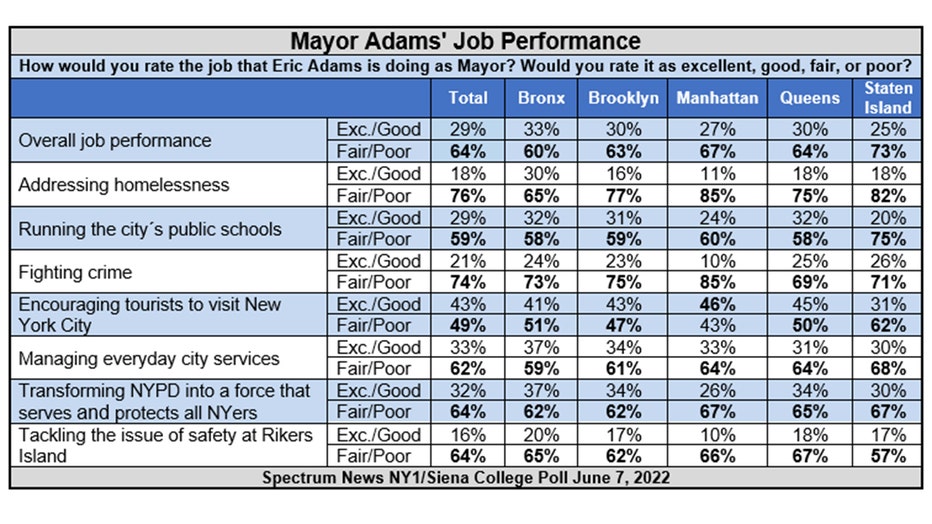 The poll shows the public perception of crime in New York City is impacting how New Yorkers feel about the mayor's job performance, according to Dan Levy, the director of Siena College Research Institute.

"We find that only 29% of New York City residents rate the job that the mayor is doing as either excellent or good," Levy said.

Data shows crime in some categories is going down but it's not happening fast enough for many New Yorkers.

"We should always be aware that perception dictates reality," said Janice Johnson Dias, a sociology professor at John Jay College of Criminal Justice. "If people feel unsafe, then that they're going to operate as if they're unsafe."

Six months into his first term, the mayor is asking New Yorkers for more time.

"I know it's going to take a while before New Yorkers feel safe in this city," Adams said. "I know that but trust me we are going to get there."