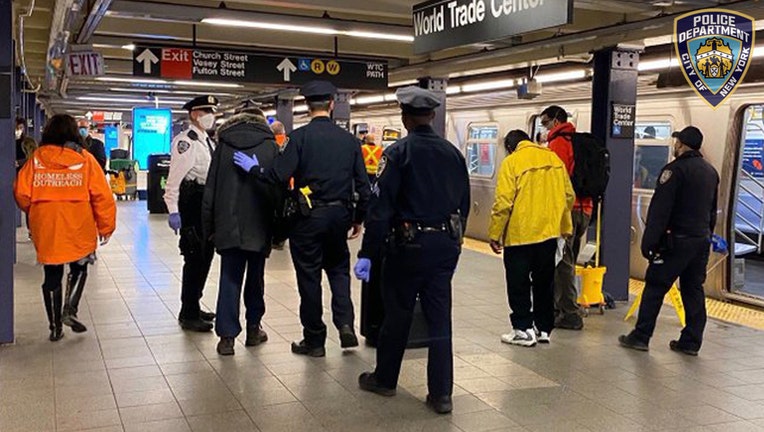 A team of police officers and homeless outreach staff at the World Trade Center subway station in Manhattan. (Courtesy of NYPD)

NEW YORK (AP) - New York City outreach workers persuaded 139 homeless people to leave the subway system and enter a shelter on Wednesday during the first overnight that the subways were closed for cleaning because of the coronavirus pandemic, the mayor said.

The subway system went silent from 1 to 5 a.m. Wednesday as part of a plan for the normally round-the-clock system to shut down for train cleaning.

Police officers escorted people out of Brooklyn's Coney Island station, the end of the line for several trains, and told them they would have to board buses to get to their destinations. Cleaners carrying bottles of bleach then boarded the trains.

Fewer trains had been running in the overnight hours anyway, but the shutdown allows for daily cleanings and for city workers to move homeless people who have been more visible in subway cars during the coronavirus.

The New York Police Department has assigned more than 1,000 officers to secure many of the system's 472 stations, as fewer than 200 can be physically locked up.

Outreach teams made up of officers and nurses are being sent to 29 end-of-line stations to roust homeless people from trains that are headed out of service for cleaning, officials said.

De Blasio said the outreach workers engaged with 252 long-term homeless people on Wednesday and persuaded 139 of them to accept services and come inside.

Many of the people at the Coney Island station early Wednesday appeared to be homeless, though one man insisted he was not and asked officers how he was going to get to his home in the Bronx.

New York City normally has the country's busiest public transit system, with a weekday ridership of more than 5 million. But the impact of the coronavirus and people staying at home has been severe, with overall mass transit use dropping more than 90% in the past several weeks.